Aucklanders' uptake of public transport is low and despite growth in recent years, the car remains their preferred means of getting to and from work, a new report commissioned by Auckland Transport shows. 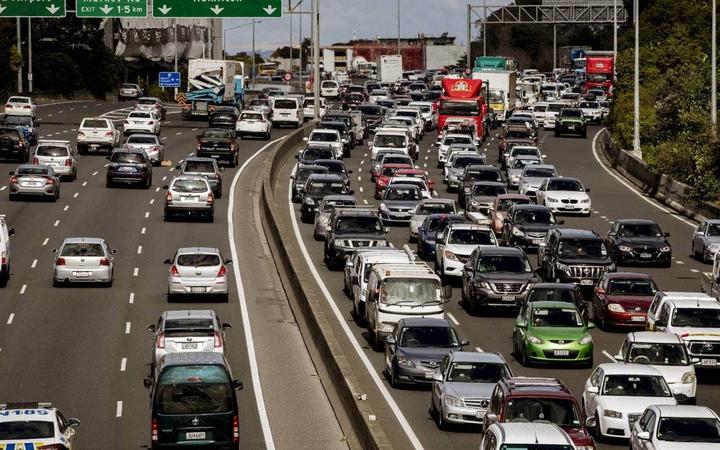 For people in the city's outer urban areas 80 percent of their journeys to and from work involve use of a car. Photo: David White / Stuff via LDR

The study by Richard Paling Consulting Ltd used data from the 2018 Census covering peoples' travel to work and education to look at key journey patterns in the Auckland region.

The report states: "The predominant mode for both the journey to work and journey to education is the private car. While the numbers commuting by public transport have increased substantially since 2013, their share of the total across the region remains low."

Public transport accounts for over half of all the commuter trips into the city centre, but that is in direct contrast with those further away from the CBD, particularly in South Auckland.

For people in the city's outer urban areas 80 percent of their journeys to and from work involve use of a car.

The report said any gains made from people using public transport to commute to and from the city centre were offset by the heavy reliance on private vehicles in outer urban areas like South Auckland.

"It appears that there is no simple 'solution' to the problem of car dependency - it is best to focus on addressing mode shift where it supports trips to work and education (eg in the isthmus and inner urban areas)."

It found the high use of cars in outer urban areas was driven by a number of factors, including the industries people were employed in, social deprivation, travelling distances and transport choices.

An AT report accompanying the study's findings said the higher use of public transport in central and inner urban areas was also concentrated near major transport hubs for rail, bus and ferry services, indicating the importance of access.

Transport and urban design blog Greater Auckland editor Matt Lowrie said the fact the report was based on data from the 2018 Census and only looked at commuters meant it provided a limited snapshot of how Aucklanders travel.

Despite its limitations, Lowrie said it raised some interesting points.

"Auckland's public transport has improved, but it's coming off a small base. So it's contributing a lot to some areas and not a lot in others."

Lowrie said the report's claim that there was no simple solution and AT should instead focus on getting people out of their cars and onto public transport in select areas was disappointing.

"Where we do put in good quality public transport people use it. So what it does show is we need to do a better job of providing services in those areas like south Auckland.

"Once we have that in place we will see the shift. But we need to start doubling down. We can't wait another decade for change."

Lowrie said with the massive growth planned for areas like Drury, Pukekohe and Takanini, better public transport was needed now.

Auckland councillor Chris Darby is a liaison councillor on the board of AT. He said the paper made for interesting reading.

"We can't back away from these challenges. These are big key issues we have to face up to."

He said to get people in South Auckland out of their cars and onto public transport meant they had to be able to access them.

"We've got to do better in those areas."

An AT spokesperson said in a statement that the report's findings were in line with previous studies and expectations. But it was working on providing better public transport services in areas like south Auckland.

Projects such as the City Rail Link would increase the frequency of trains to and within the south, while the Puhinui interchange would provide improved bus services to the airport and surrounding areas.

It had also earmarked $90 million for cycleways and related projects in Manukau and Māngere.

"Depending on funding we also want to invest in more frequent bus services with longer hours of operation across more of South Auckland. All of these investments will improve travel options, increase their attractiveness and support 'mode shift' from private vehicles."

In January the government announced the $12 billion NZ Upgrade Programme. The infrastructure package included $1.3bn for the Mill Rd project which will run between Manukau and Drury.

It also included $371m for the electrification of the rail lines between Papakura and Pukekohe and two new stations at Drury Central and Drury West, which will be built from 2023 at a cost of $247m, while $423m was earmarked for the widening of the southern motorway between Papakura and Drury.