Scientists are reminding people to check the water quality of beaches, estuaries, lagoons and rivers before they swim this summer. 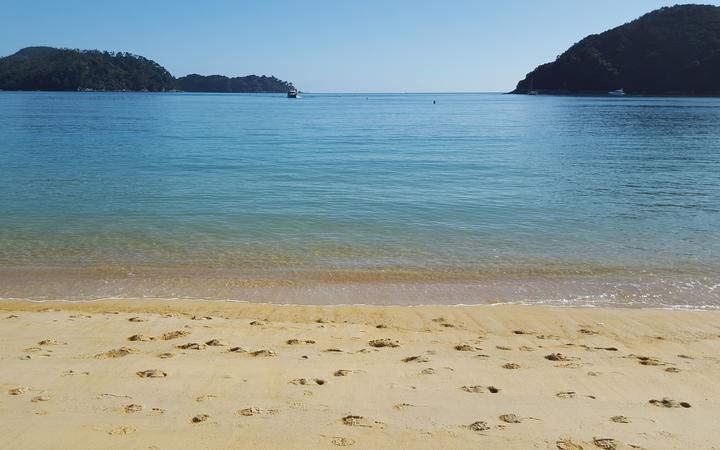 Beaches - like this pristine spot in Abel Tasman - are more likely to be safe from bacteria than rivers, lakes, estuaries and lagoons - but people should still check and take care if there has been heavy rains recently. Photo: RNZ / Tracy Neal

"You get that surface runoff and it runs over the roads, down the gutters, we do tend to see some surface flow come in and that can carry with it pathogens from animals, you can get things like sewer overflows etcetera," she said.

"Really, weather plays a huge role in how good or bad a season may be for recreational water quality."

She said that could mean water could become infected with faecal indicator bacteria like E coli and enterococci, which could lead to people getting sick.

"Most typical are things like gastroenteritis, skin irritations, eye irritations or skin infections ... it's not always pleasant if you're just looking for a nice day out."

She advised people to take care around the water by doing some basic checks when deciding whether to swim.

"We always advise people two to three days after a heavy rain to stay out of - particularly - our fresh water systems," she said.

"That's when we get a lot of that flow coming down and often you might see the water's a little bit less clear, a little bit dirty looking, and that's the sediments that are coming in off the land and they carry with them some of that faecal indicator bacteria.

"Also, when you go down to a site, look on lawa.org.nz Can I Swim Here, and that will show you some of the most recent results ... it'll tell you what the testing has shown and if you toggle alongside it'll also give you an overall bacteria grade [for the swimming spot].

"That gives you the last three years of data and can tell you about how many times it might have exceeded our national guidelines.

"Have a look at the website, have a think about what's happened in the last few days - has it rained heavily - and then when you get there just have a look around: you know, does the place look all right, is the water clear, can you see lots of animals or birds, those sorts of things."

She said coastal beaches were more likely to be safe than freshwater sources, but people should also take care around estuaries and lagoons.

"Most of our beach sites have a really really high water quality when it comes to those faecal indicator bacteria, we have about 93 percent of the time those beach sites are classed as suitable for swimming.

"Rivers, they are more influenced - by surface overflow, rainfall - it can wash some of those water contaminants into the waterways.

"The lagoons, the coastal lagoons, estuaries ... when they slow down, they become slightly warm, the water level gets a bit low, they can actually also exceed [safe levels] more often than areas like your coastal beaches."

MetService has forecast rain across the North Island this weekend - particularly in the east - and isolated showers in the South Island about the ranges south of Mount Cook.