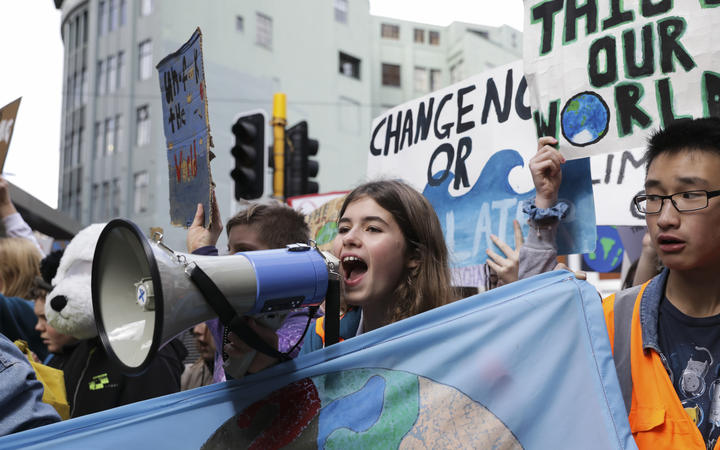 With that in mind, how has a government whose leader made statements like that about climate change being a generation's nuclear-free moment done by the environment?

RNZ asked a range of experts what they thought. This is part two of a six-part series, concluding with the minister:

Being a member of School Strike 4 Climate, Lennox has a focus on climate change and the Zero Carbon Act. He's part of a growing youth movement advocating for action on climate change, and he's pretty critical.

"I was really expecting more with the Labour/Green parties being in parliament, and while some first steps have been made, there could have been much more progress. The Zero Carbon Act has been passed which is a great first step, but it is very weak, and could have been much better. As a small, developed country, New Zealand should be leading the world in the fight for climate justice, but unfortunately with the weak Zero Carbon Act, we are far from this desirable position.

"The government has also made progress on the biodiversity strategy which is good to see.

"It is really good to see the Zero Carbon Bill getting passed with cross party support, and it is a really good starting point. However, it is only a start, and could be much stronger. This is a great first step to getting New Zealand to reduce emissions, but the act needs to be much stronger."

"The best thing that could happen before the election is the government ending OMV's permit for offshore drilling. OMV have been granted permission to drill off the coast of Taranaki, which needs to be stopped. I would love to see this permit terminated before the next election."

"There are multiple shortcomings with the Zero Carbon Bill that need to be fixed, and people need to know that it must be made a lot stronger. To align with what the IPCC said needs to be accomplished, we need to reduce greenhouse gas emissions by 50 percent by 2030.

"The public need to know that New Zealand should be leading the world in the fight for climate justice, but at the moment we are far from it. New Zealand is a small and agile developed country with a can-do attitude, and we are perfectly poised to be at the front of the global stage when it comes to greenhouse gas reduction."

"While it is good to see the government making some first steps, more ambitious action could be taken."

"I wouldn't score the coalition government any higher than four, and while I think that it is good to see the first steps being made … really there should have been much more progress."