The air quality on Wellington's golden mile is as bad as some of the worst polluted sections of clogged multi-lane motorway networks in the country. 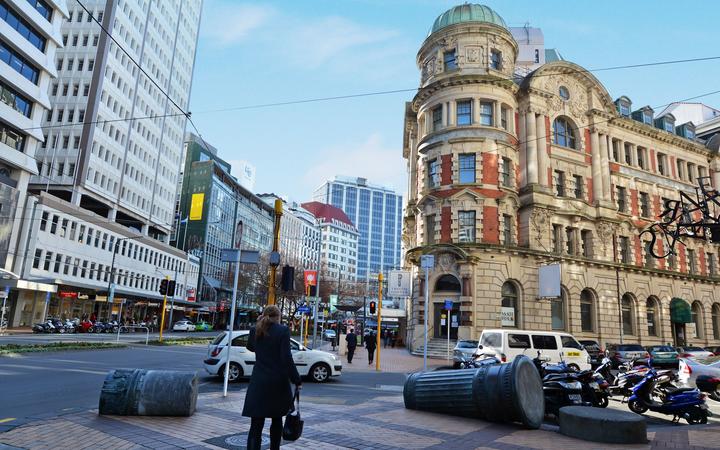 Lambton Quay in Wellington is part of the city's 'Golden Mile' that makes up the CBD and entertainment districts along four main thoroughfares. Photo: 123RF

NIWA is updating its national road transport air pollution map which uses samples from 1000 sites around the country.

NIWA scientist Ian Longley said the most polluted areas in New Zealand were the places where there was lots of traffic with stop-start driving.

These include Auckland's central motorway junctions and the state highways in Hamilton.

Dr Longley said what was surprising was that the air quality on Lambton Quay and Courtenay Place was about as bad as those places - despite having just a 10th of the traffic volume of the major arterial routes.

"It's this combination of a small number of diesel vehicles and tall buildings which are sheltering the street and stopping the air dispersing.

"It's really striking that that really does have a big effect."

Dr Longley said relatively small changes like getting diesel buses out of the inner city would make a big difference.

He said the old diesel buses and trucks were preventing the country from having some of the lowest urban air pollution levels in the world.

New Zealand had a relatively large number of old dirty diesels, he said, and these had a disproportionately negative impact on air quality.

However, there was no doubt that even the country's most polluted areas were better than comparable places in Asia and Europe.

"Given our isolation and windiness we really should have the best urban air quality of almost anywhere in the world," he said.

"That's a realistic goal for us."

NIWA will be releasing the air-quality maps for all the country's towns and cities on its website in the new year.