The Duke and Duchess of Cambridge have announced a global prize to tackle climate issues, pledging "a decade of action to repair the Earth". 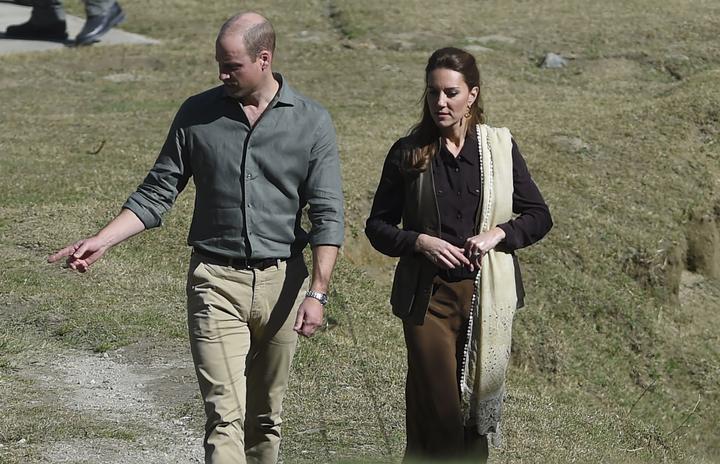 Britain's Prince William (L), Duke of Cambridge and his wife Catherine (R), Duchess of Cambridge, walks on their arrival at the Kalash tribe village in Bumburate Valley in Pakistan northern Chitral District on October 16, 2019. Photo: AFP

Five winners will receive the Earthshot Prize every year between 2021 and 2030.

The cash prize will be for individuals or organisations who come up with solutions to environmental problems.

Prince William said the world faces a "stark choice" to continue "irreparably" damaging the planet or "lead, innovate and problem-solve".

The announcement was made in a video narrated by Sir David Attenborough posted on social media.

The veteran broadcaster and naturalist said the prize would go to "visionaries rewarded over the next decade for responding to the great challenges of our time".

The prize is set to launch officially later in 2020 - a year that will also see the Convention on Biodiversity in China in February and the COP26 Climate Change Conference in Glasgow in November.

A series of challenges will be announced, aimed at finding least 50 solutions to the "world's greatest problems" including climate change and air pollution.

Who is ready to lead as we make the 2020s a decade of action to repair our planet? Introducing the @EarthshotPrize the most prestigious environment prize in history. Led by Prince William and a global alliance, the Earthshot Prize will inspire the the planet’s greatest problem solvers to solve Earth’s greatest problems: the emergencies facing our natural world. Follow @EarthshotPrize to find out more and see the full launch film, narrated by Sir David Attenborough.

More than 60 organisations and experts were consulted in the development the prize.

It will initially be run by The Royal Foundation of The Duke and Duchess of Cambridge, but could become an independent organisation.

Kensington Palace said it would be supported by philanthropists and organisations.

The prize's name is inspired by former US President John F Kennedy's "Moonshot" - when he set a goal in 1961 to land American astronauts on the Moon before the end of the decade.

The duke said: "The earth is at a tipping point and we face a stark choice: either we continue as we are and irreparably damage our planet or we remember our unique power as human beings and our continual ability to lead, innovate and problem-solve."

The royal couple had trailed the announcement with a cryptic tweet on Monday, which read: "Stay tuned for our first announcement of 2020 very shortly..."

It is the latest in a string of public statements that the duke has made on environmental problems this year.

In October, he called for more education and political action to tackle climate change, as he and the duchess visited a melting glacier in Pakistan.

He has also previously collaborated with Sir David, interviewing him at the World Economic Forum in January.