Greta Thunberg's father has said he thought it was "a bad idea" for his daughter to take to the "front line" of the battle against climate change. 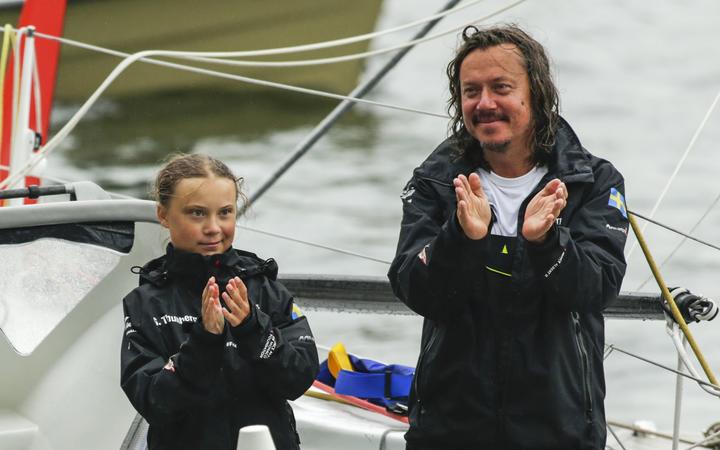 Swedish climate activist Greta Thunberg, 16, and father Svante Thunberg in New York after a 15-day journey crossing the Atlantic on the Malizia II, a zero-carbon yacht, on 28 August 2019. Photo: AFP

Millions of people have been inspired to join the 16-year-old in raising awareness of environmental issues.

But Svante Thunberg told the BBC he was "not supportive" of his daughter skipping school for the climate strike.

Thunberg said Greta was much happier since becoming an activist - but that he worries about the "hate" she faces.

As part of the same broadcast, guest-edited by Greta for Radio 4's Today programme, Sir David Attenborough told her she had "woken up the world" to climate change.

She called Sir David on Skype from Stockholm in Sweden, where she lives, and told him how he inspired her activism.

The broadcaster and naturalist told Greta she had "achieved things that many of us who have been working on the issue for 20 years have failed to do".

He added that the 16-year-old was the "only reason" that climate change became a key topic in the recent UK general election.

Greta was nominated for this year's Nobel Peace Prize, after spearheading a global movement demanding world leaders take action over climate change. It led to co-ordinated school strikes across the globe.

She is among five high-profile people taking over the Today programme as guest editors during the festive period.

The BBC flew presenter Mishal Husain to Sweden to interview the teenager and her father.

On the decision to fly, Today editor Sarah Sands said: "We just did not have time for other means of transport. But we met our cameraman there and the interview between Greta and David Attenborough was conducted by Skype, which felt the right way for the two of them to communicate."

Speaking to Husain as part of the show, Thunberg said his daughter had struggled with depression for "three or four years" before she began her school strike.

"She stopped talking ... she stopped going to school," he said.

He added that it was the "ultimate nightmare for a parent" when Greta began refusing to eat.

To help her get better, Thunberg spent more time with Greta and her younger sister, Beata, at their home in Sweden. Greta's mother, opera singer and former Eurovision Song Contest participant Malena Ernman, cancelled contracts so the whole family could be together.

The family also sought help from doctors, Thunberg said. Greta was diagnosed with Asperger's - a form of autism - aged 12, something she has said allows her to "see things from outside the box".

Over the next few years they began discussing and researching climate change, with Greta becoming increasingly passionate about tackling the issue.

"Greta said: 'Whose human rights are you standing up for?', since we were not taking this climate issue seriously," he explained.

He said Greta got "energy" from her parents' changes in behaviour to become more environmentally friendly - such as her mother choosing not to travel by aeroplane and her father becoming vegan.

Thunberg has also accompanied his daughter on her sailing expeditions to UN climate summits in New York and Madrid. Greta refuses to travel by air because of its environmental impact.

"I did all these things, I knew they were the right thing to do ... but I didn't do it to save the climate, I did it to save my child," Thunberg said.

"I have two daughters and to be honest they are all that matter to me. I just want them to be happy," he added.

Thunberg said Greta had "changed" and became "very happy" as a result of her activism.

"You think she's not ordinary now because she's special, and she's very famous, and all these things. But to me she's now an ordinary child - she can do all the things like other people can," he said.

"She dances around, she laughs a lot, we have a lot of fun - and she's in a very good place."

However, since Greta's school strike stunt went viral online, Thunberg said she has faced abuse from people who "don't want to change" their lifestyles in order to save the environment.

Greta has said previously that people abuse her for "my looks, my clothes, my behaviour and my differences".

Her father said he was particularly worried about "the fake news, all the things that people try to fabricate her - the hate that that generates".

But he added that his daughter deals with the criticism "incredibly well".

"Quite frankly, I don't know how she does it, but she laughs most of the time. She finds it hilarious."

Thunberg said he hoped things would become "less intense" for his family in the future and that he thinks Greta "really wants to go back to school".

He added that as Greta turns 17 soon, she will no longer need to be accompanied on her travels.

"If she needs me there, I'll try to do it," he said. "But I think she'll be, more and more, going to do it by herself which is great."