Swedish activist Greta Thunberg says young people are "bringing change" to the Madrid climate talks and will not be silenced. 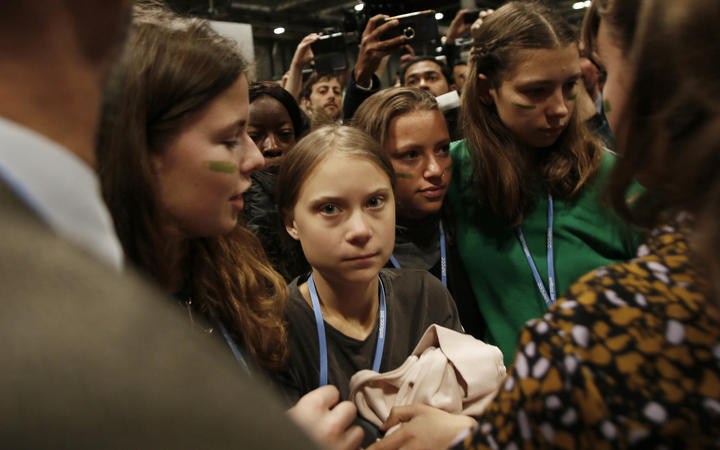 At a news conference Miss Thunberg said that she hoped the negotiations would yield "something concrete".

The 16-year-old was mobbed by press and spectators when she visited the conference centre on Friday.

She had to be escorted away for her own safety amid shouts of "leave her alone" from concerned observers.

Having arrived via overnight train from Lisbon to large crowds waiting for her in Madrid, Miss Thunberg was set to join a large demonstration in favour of rapid climate action this evening.

Speaking before the gathering she said that the voices of the young would not be drowned out.

"People want everything to continue like now and they are afraid of change," she told reporters.

"And change is what we young people are bringing and that is why they want to silence us and that is just a proof that we are having an impact that our voices are being heard that they try so desperately to silence us."

Miss Thunberg is due to address the climate negotiations that have been going on in Madrid for the past week. She remains hopeful that they will lead to a positive outcome.

"I sincerely hope that COP25 will lead to something concrete and it will lead to also an increase in awareness in people in general and that the world leaders and people in power grab the urgency of the climate crisis because right now it doesn't seem like they are," she said.

"We will do everything we can to show that this is something that cannot be ignored, that they cannot just hide away any longer."

Miss Thunberg has arrived in Europe after a voyage across the Atlantic by yacht.

The hope among many here is that the scale of the march and her speech to the COP next week will give a big boost to the talks process that seem badly in need of a lift.

This COP started with great hope last Monday, with strong words from the UN secretary-general and others, warning that time is running out and that negotiators should be guided by the science.

Since then, the urgency has given way to frustration.

Little obvious progress is being made on the central question of raising countries' ambitions to cut carbon.

Indeed, UN climate chief Patricia Espinosa said the issue of increased pledges wasn't even on the agenda for the final outcome of this conference.

"We don't have in the agenda one item that's called 'ambition' and, therefore, it's not like we are expecting to have a specific decision on that."

In the face of several recent scientific reports stating that countries were falling further behind when it came to meeting the Paris agreement targets, this was a little disturbing, to say the least.

According to some experts at these talks, extra ambition would be great but equally important would be a firm timetable to deliver their pledges over the next 12 months, ahead of the Glasgow COP this time next year.

"It would be extremely concerning if the countries here in Madrid did not agree that there is a timeline for next year in coming forward with their commitments," said David Waskow from the World Resources Institute.

"That is a key outcome that we have to see here. It is not something that you can keep punting further and further away, this is something that requires immediate action."

Even the Pope is concerned.

"We must seriously ask ourselves if there is the political will to allocate with honesty, responsibility and courage, more human, financial and technological resources to mitigate the negative effects of climate change," Pope Francis said in a message to participants here.

"What the European Union does next week is a critical signal to the rest of the world that will shape the outcome in Madrid," said David Waskow. "What happens in Brussels will resonate in Madrid."

Another ongoing issue that is making people upset here is the question of climate justice.

Much attention has been focused on the attempts by poorer countries to finally get some traction around the question of loss and damage, the impacts of climate change from events that just can't be adapted to, such as sea-level rise or storms made more likely by rising temperatures.

The hope from many is that here in Madrid, the developing nations would be heard and a mechanism with funding would be set up to deal with loss and damage.

Of course, the question of climate justice is not just between countries but often within countries as well.

"The ones who contributed the most are the ones who feel the impacts the least," said Isadora Cardoso from campaign group GenderCC - women for climate justice.

"Even within developed countries the poorest are the most affected whenever there are climate disasters or impacts, but they are not the ones who consume more and contribute the most to the causes of climate change."

There is still time to ensure a strong outcome in Madrid and the arrival of ministers next week will increase the sense of urgency - but right now there's a big disconnect between the size of the task and the willingness of countries to step forward with the pledges and the money needed to deal with the biggest challenge facing Planet Earth.