All that's still to be done in the bathroom of the country's first "climate safe house" is a roll of toilet paper put on the holder, so to speak. 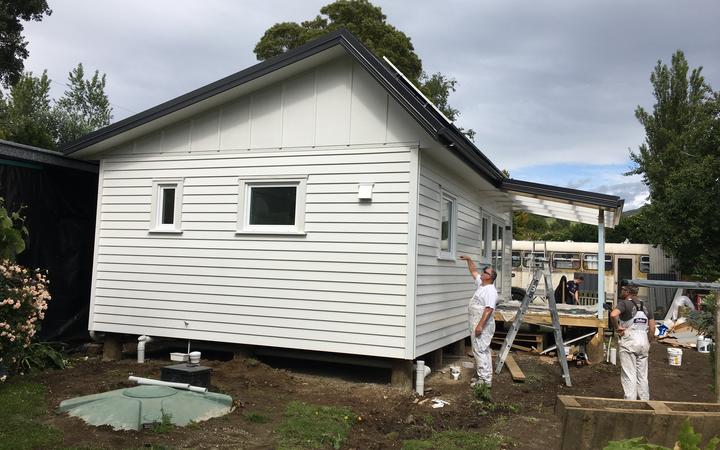 The exterior of the climate safe house as painters put finishing touches on. The home is almost finished and it's hoped it will get sign-off by the end of January. Photo: Supplied / Blueskin Resilient Communities Trust

The house in Waitati, just north of Dunedin, is almost finished - a few finishing touches and all it will really need is sign off from the local council so it meets its code of compliance.

It's a project from the Blueskin Resilient Communities Trust (BRCT) to create a climate safe home that is a "transportable, modular, affordable eco-home".

It's packed full of features.

"Effectively we've looked at the house as thermal unit ... with clip-ons," Willis said.

The SIPs are 150mm thick with a strand board exterior and a polystyrene core rated highly for its insulation quality.

The windows and doors are "uPVC, double glazed, low-E glass" - in other words, the frames have insulated thermal breaks, and have glass that allows light and warmth in but reflects some heat back into the room. 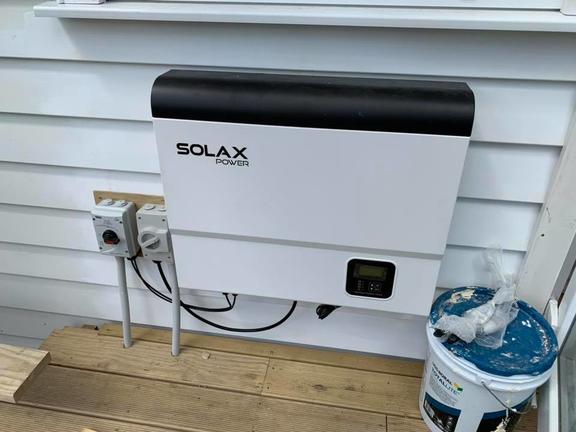 "The roof is there both to give shape to the house, and to shed water and also to hold the solar panels ... because the house is a mini power station as well... So sitting on the north facing (roof panels) at 45 degrees, it's got seven 275-watt solar panels ... they will be feeding into a five kilowatt hour battery pack that's grid-tied.

"So that means that through an inverter the house will balance out how much is consumed at the house and how much is exported into the grid and it'll try and minimise consumption, and we think that house will be energy positive.

"It really depends on how the house is used. If the grid goes down the house can keep the lights on and keep functioning."

It's also hooked up to the Blueskin Energy Network - the local network where excess energy produced by a household goes back into the network to be used by other local people at a cheaper rate.

Inside the home, Fisher and Paykel have provided top-end whiteware with high energy efficiency.

The home is fully electric - it has no gas or wood-burning facilities.

The home has trickle feed water supply from a water tank. Waste water goes into a septic tank which has flood tolerance and is "like an ecosystem in a tank".

"It uses worms rather than pumps for aeration. So it's a low energy system." 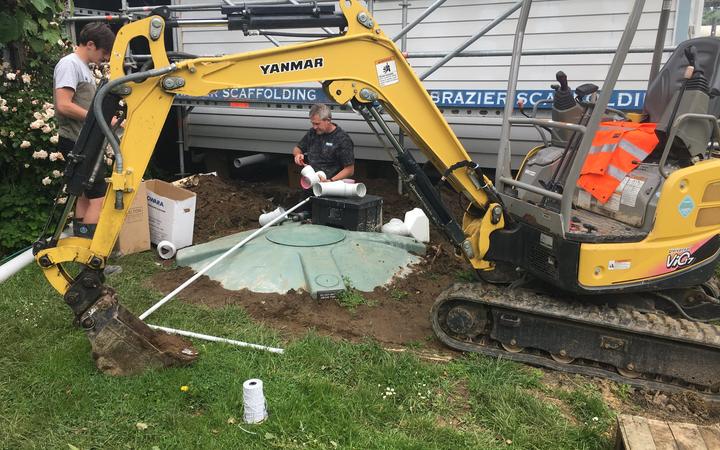 The interior of the house is 58 square metres, plus a deck outside.

Despite that, it was surprisingly spacious, Willis said.

It's 1.1m above ground level and 3.6 metres above the mean high tide mark - higher than the district plan's guidelines for building in a hazard zone.

It has also been designed to be replicated.

"We'd like to have a book a standardized book of plans that people can use to do builds relatively quickly," Willis said. 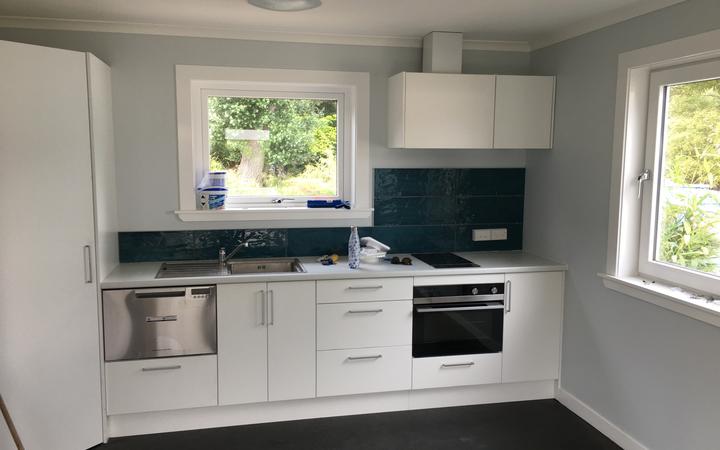 The interior of the house is 58 square metres and is kitted out with top-end whiteware with high energy efficiency, thanks to Fisher and Paykel. Photo: Supplied / Blueskin Resilient Communities Trust

The house is being built on Cusha McCarthy's property.

She's been living in her garage after flooding rendered her house unliveable and she couldn't get it re-insured.

Said she expected to move into the home in late January - although that may change depending on when the home is signed off.

More than anything, she's looking forward to a shower and a toilet.

"I can't reiterate that enough really. So that's probably the main thing. I've been inside (the house) and had a look last weekend for the first time and it really is looking very lovely."

She got to have a say in some of the colour scheme inside the home and went for duck-egg blue on the walls inside.

After so long living in a garage, it's all coming together.

"I'm excited now because it's all been pretty stressful up to this point and actually being able to get into the house I mean, I'm going to have to get a licence to use anything that's in there - I've never seen a cook top like that or an oven like that or a fridge like that or anything else like that. So yes...

"I don't know where to start, really. Everything about the place is just pretty, you know, amazing. I'm not going to be cold in it.

"That's a huge thing at my age because I'm full of arthritis. And I'm just used to freezing every winter... but yeah it means I don't have to worry about going and getting wood (for a fire) and I'm still going to be warm... the other main thing is the electricity - it's going to be really economic to live on it … compared to paying like, the power that I've been used to paying." 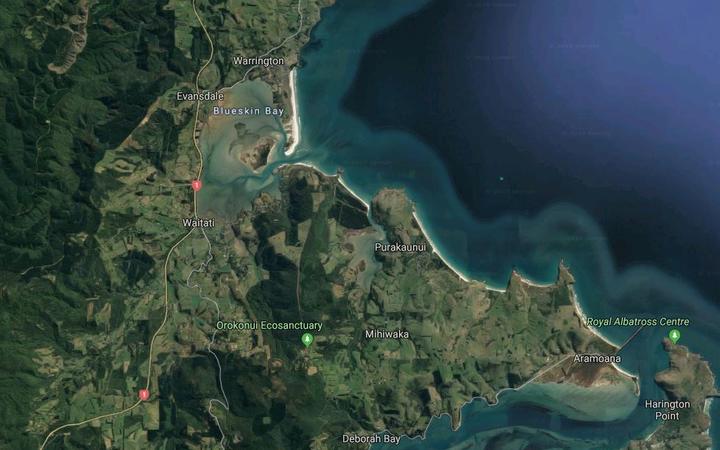 Waitati is located about 20km north of Dunedin. Photo: Google

Willis is getting exciting about seeing hard work come to fruition, too.

The house arrived on site on 4 November after the exterior was constructed at Forsyth Barr Stadium in Dunedin. 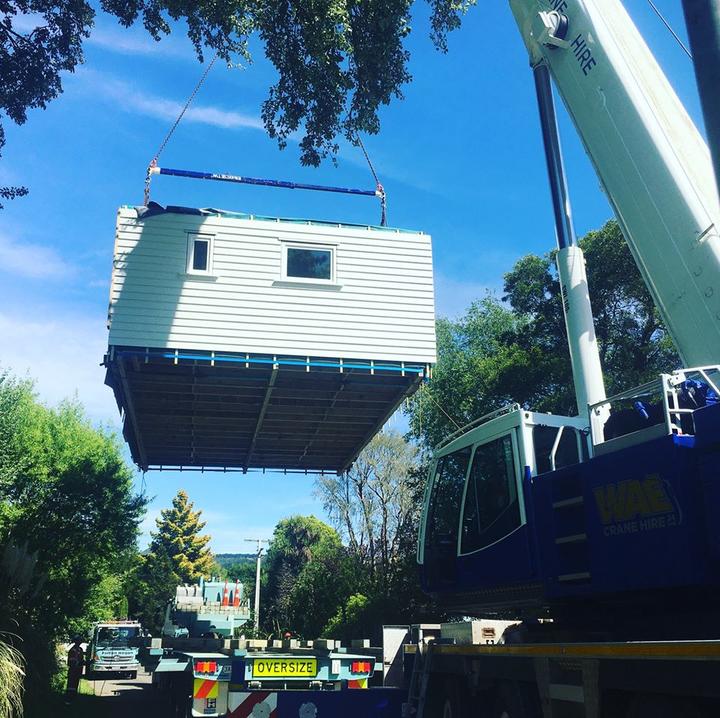 The basic structure of the climate safe house being lifted into place by a crane. Photo: Supplied / Blueskin Resilient Communities Trust

Since then, construction has gone fast, assisted by a range of businesses who went above and beyond, Willis said.

"When you think about that in terms of speed, of build, for a very high quality, well about building code structure, it is pretty exceptional."

It's hoped that build time will only get faster as experience with constructing the houses grows.

"It's been a massive project and it's been years in the in the planning and I'm really pleased that we will be able to deliver it and make a real difference and provide a pathway project for others to use and to learn from.

"We've a fair bit of interest from people who want the plans or want to know about it ... we need to make sure that, you know, we can translate that interest into expansion of the model."

'The house is temporarily resident'

Although a major element of the home's design is that it is elevated and can be used in flood-prone areas - and then moved - there was more to it than that, Willis said.

"It really needs to be it needs to be like that, we believe because ... the house is temporarily resident on this property. So we need to make sure to survive the first few flood events but once the whole area becomes so frequented by flooding, we would be taking the house away.

"What we've tried to do is think of something that's a solution both for the housing and the climate crisis. So it's more about adaptation, and it's about new ways of doing things." 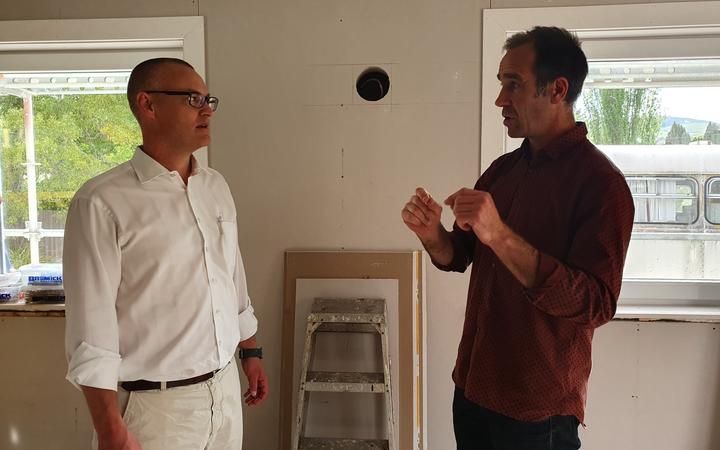 He said there needed to be "a lot more work looking at how we build the 30,000 homes we build each year to be energy efficient, water efficient, lower carbon, better stormwater management - that kind of thing...

"We actually need everybody pushing at it from every angle in great. So it's great Scott and his team are looking at this and hopefully that leads to some mainstream builders thinking about it a bit more... we need grassroots stuff up because hopefully this gets Dunedin Council thinking about it more and we also need people like us working with the main volume home builders, retirement villages and pushing the changes to the building code.

"And hopefully we all learn off each other and push for change together.

"We've got $19 billion worth of property at risk from rising sea levels. And in some instances, a house like this is, is going to be the only solution, particularly as insurers start to take away those options." 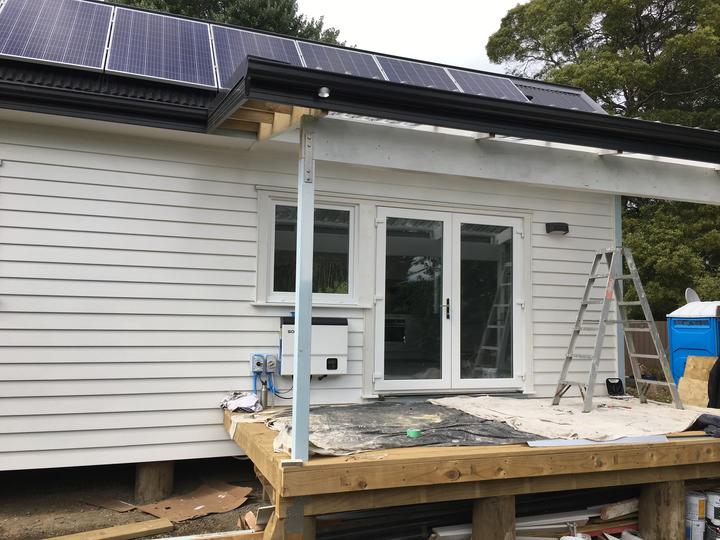 The entrance and deck on the house, with some of the seven solar panels installed on the roof visible. Photo: Supplied / Blueskin Resilient Communities Trust

Eagles said another exciting element of the home was the possibility to take concepts from it and apply them to building other homes.

"We think it's a great initiative … I would say that we wouldn't want building buildings which withstand floods to be the get-out from community-wide solutions.

"The most important thing we can do regarding flooding is community-wide projects to deal with surface water runoff and planning well. And that's why we think that stuff is really, really important.

"We have to plan for the future climate."