Tiny house owners are accusing the government of hypocrisy, amid fierce debate if their dwellings are legally vehicles or buildings.

While the Ministry of Business, Innovation and Employment (MBIE) insists tiny houses must comply with the building code and owners can't put their houses on wheels as a way of saving tens of thousands of dollars, it's ordered its own batch of emergency residential units on wheels.

Ten of the self-contained, one and two-bedroom houses will be distributed around the country for people to live in after a civil defence emergency. MBIE obtained an exemption to the building code so the houses could have wheels - and said they'll still met the building code's other requirements, and wouldn't be towed on the open road.

But the fact the houses will be on wheels hits a nerve with tiny house owners like Amberley man Alan Dall, who was told by Hurunui District Council, and then by MBIE, he needed to make his tiny house building code compliant as a fixed-foundation structure.

He maintains it should simply be treated as a vehicle, as should MBIE's houses.

"To me it just seems MBIE can make up their own rules as they go along and call it an exception. It just seem to a wee bit unfair, a wee bit hypocritical. If it can be moved on on the road and then it's a vehicle, so why not call it a vehicle? Why call it a building?" he said.

Building consultant Alan Light said the fact MBIE sought a consent recognised the view the houses were buildings and not vehicles, as they had put to Mr Dall.

But he said the question remained why it got an exemption for the houses, while insisting the average tiny house owner must go through the full consent process.

"Avoiding unnecessary costs is imperative from a budgeting point of view and I think that MBIE recognises this," he said.

"It would have probably cost them at least the cost of one of the units just for the compliance cost, if they hadn't got the exemption."

Eco Cottages owner Colin Wightman also believed the tiny houses he made were vehicles, which should be treated like a caravan or RV, and said they weren't designed to become fixed foundation structures. 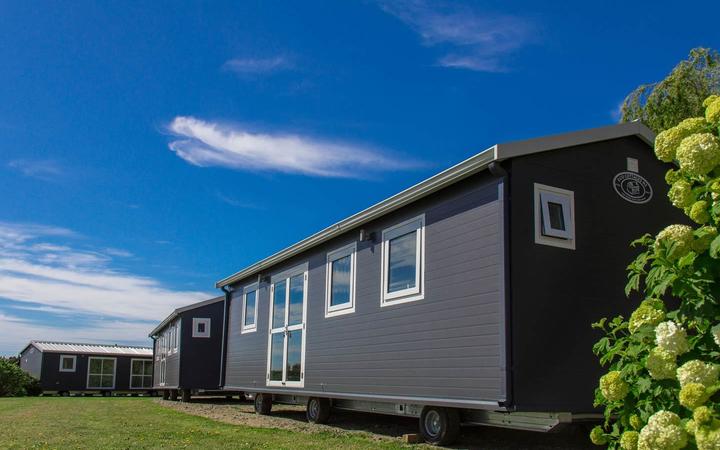 Mr Wightman was worried his customers would be put off purchasing his tiny houses, if they had to bear the burden of fixing it to the ground and making it compliant, just like Alan Dall was told to do.

Mr Wightman acknowledged that MBIE's houses were for emergency situations, but said New Zealand's housing crisis was also an emergency, for which his tiny houses were a viable solution.

However, Alan Light said MBIE obtaining an exemption could mark an opportunity for tiny house maker and owners.

As the Building Act stands, Mr Light said it was unlikely the average tiny house owner would get an exemption as easily as MBIE.

But he said tiny houses just needed to be treated like verandas and small sheds and carports, given an exemption under schedule 1 of the Building Act - so they can still have wheels.

Alan Dall is taking MBIE to court, with a preliminary hearing in two weeks, to appeal their decision on his tiny house.