A government report into the effects of climate change estimates $19 billion of property is at risk from increasing flooding and coastal erosion. 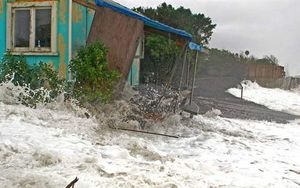 A 284-page draft report from the Ministry for the Environment has been released by the Green Party.

The report warns sea levels may rise up to 40 centimetres by 2050.

Green Party leader James Shaw said it painted a more accurate picture of the scale of climate change than previous reports and the government should have released it.

Councils, businesses and families needed to know that information so they could start planning, Mr Shaw said.

The report showed there was a considerable risk from flooding and coastal erosion by only a moderate sea level rise, he said.