The Green Building Council is calling for more to be done to stop construction waste going to the dump as the building boom ramps up. 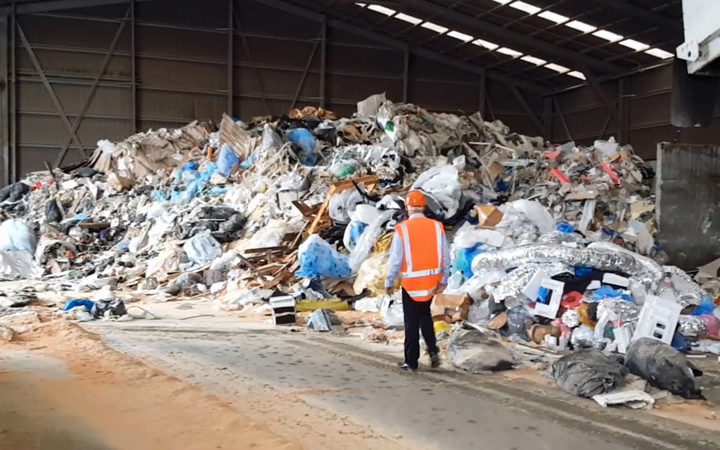 It is estimated up to 600,000 tonnes of building and demolition waste is going to landfill each year. Photo: RNZ / Teresa Cowie

The Auckland Council estimates up to 600,000 tonnes of building and demolition waste is going to landfill each year.

With the government's KiwiBuild plan set to add a further 50,000 homes to the city's workload over the next 10 years, the amount of waste is expected to skyrocket.

"That goes to landfill at the moment. So unless something is put in place to divert that then we'll see a lot more construction or demolition waste going to landfill."

Construction tools like jib, he said, could be used for other areas like fertiliser for kiwifruit farms.

"Fundamentally to change behaviour what you really need is incentives and checks in place."

Mr Eagles pointed to possible solutions like increasing the country's waste levy at landfills, or supporting accreditation such as the Green Building Council's own Homestar scheme, which provides an incentive for reducing waste.

Part of the problem was that the high cost of building made it cheaper to over-specify materials rather than waiting for them to be delivered, he said.

"In order to get to where we need to go to we need to do a lot more around the circular economy and certainly the biggest single industry in New Zealand for waste is the construction industry. It's miles behind most other sectors."

Construction and industrial waste makes up about 85 percent of Auckland waste sent to landfill.

Auckland Council blamed the sector for much of the 40 percent growth in landfill waste between 2010 and 2016.

The council's general manager of waste solutions, Parul Sood, said it was looking at how waste could be diverted or cut down in the first place.

"There was a recent research piece from AUT that actually suggests it's about $30,000 worth of material that is wasted in every house built."

She said the council was already working with the industry on on-site waste management plans to avoid waste.

"It's not a requirement at the moment but we're keen to do this on a voluntary basis and see how well that can go."

Ms Sood said the council had also been assessing how it could play its part.

"We're looking at our own projects and saying how can you procure this better? Whether it's construction or demolition, how do you do this at the procurement stage to make sure you include those elements of diversion.

"It has to be done at that initial starting point rather than thinking of it as an add-on at the end because then it's sometimes too late."

She also said the council had been pushing for an increase in the country's waste levy for some time with a figure of up to $140 put forward as necessary.

"We do have the issue of the cost of landfill being cheaper than recovering. So we need to change the economics behind it to make sure economically it's better to recycle than to dispose of in landfill."

The government's waste levy of around $10 a tonne only covers 11 percent of the country's more than 400 landfills.

Associate Environment Minister Eugenie Sage has announced a programme of work into waste minimisation, including plans to push up the levy and expand the number of landfills that charge it.

"There is a wider work programme on waste because we do need to get smarter and need to find new ways of getting value out of resources rather than just dumping them. Designing waste out of our system, particularly in the construction and commercial space, is absolutely critical because of the large volumes."

She said work was also being funded through the Waste Minimisation Fund, including a grant of $3.1 million to Auckland recycling firm Green Gorilla which would divert 40,000 tonnes of waste from landfill annually.

"There's a whole need to encourage the profession to think about. when they're building new houses, what's needed onsite and how do we reduce the waste."

She said she had brought up the problem of instilling waste reduction early in procurement with Economic Development Minister David Parker and caucus.

"I, as Associate Environment Minister, am really keen that procurement policies by government agencies look at how we actually reduce waste at the outset."

Mr Parker's office said there were "no specific waste minimisation targets or incentives for construction procurement".

It said while the ministry did provide a guide for agencies, which included consideration for the environment, it was up to each department whether or not they followed it.

"KiwiBuild is currently developing a set of design standards that will include waste minimisation as a goal in their construction projects."