The Eastern Bay could soon become the epicentre of co-operative housing in New Zealand. 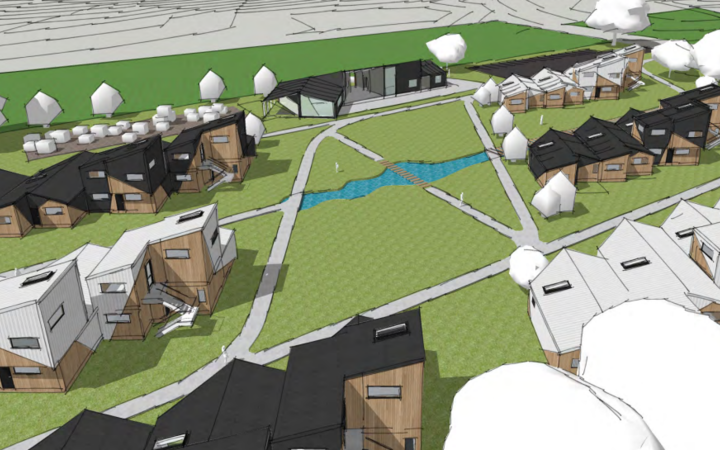 An artist's rendering of what Tuhoe's eco-village may look like. Photo supplied Photo: Charlotte Jones/LDR

Tūhoe and a private group of individuals are both looking into building co-operative housing in the region.

A resource consent application has been lodged on behalf of the Tūhoe Charitable Trust to build a 25-unit eco village at the old Tāneatua railway yard on the corner of Morrison and Station Roads.

The second group is at a much earlier stage in its housing dream with a meeting planned next week to gauge community interest and progress the idea.

Tūhoe's proposed eco-village is the first of 40 the iwi wants to build for its people. The village will be similar to Tūhoe's Te Kura Whare which houses its governing body Te Uru Taumatua.

Te Kura Whare was the first certified living building in New Zealand, and the new village aims to emulate this example.

The resource consent states the village will be more sustainable than a standard residential development and will contain communal gardens and orchards, a communal kitchen and dining area, solar electricity, roof collected rainwater as a water source, onsite botanical wastewater treatment and disposal and encouragement away from heavy reliance on private motor vehicles.

The 25 homes will be constructed in six blocks of terraced housing with a mix of single and two-storey residences with one to three bedrooms, and studio units. The homes will house 70 to 75 people.

Each block will have either light-coloured or dark-coloured metal cladding offset with timber.

The angular interface between the metal and timber claddings is to represent the mountainous form of Te Urewera. Each home will have a small private garden.

Tūhoe has received written approval from four neighbours to the site while another three have expressed concerns about privacy, construction noise, traffic and whether the eco-village could affect the resale value of their homes.

However, it was now researching how rates should be applied to the village, as, apart from the road to Tāneatua and the possible usage of services such as public libraries or swimming pools, it was not expected to be a burden to the Whakatāne district.

"The council understands the intention is to provide services at the village in an environmentally sustainable manner, including not connecting to existing infrastructure," said Mr Begley.

"Although this approach would challenge the council's rating philosophy for land where infrastructure has been provided, we are very keen to find a solution that recognises and supports the aspirations of Tūhoe."

Mr Begley said the council had researched how rates were treated at similar types of developments such as Earthsong in Auckland and would welcome the opportunity to workshop the rates approach with the team from Te Uru Taumatua in the near future. 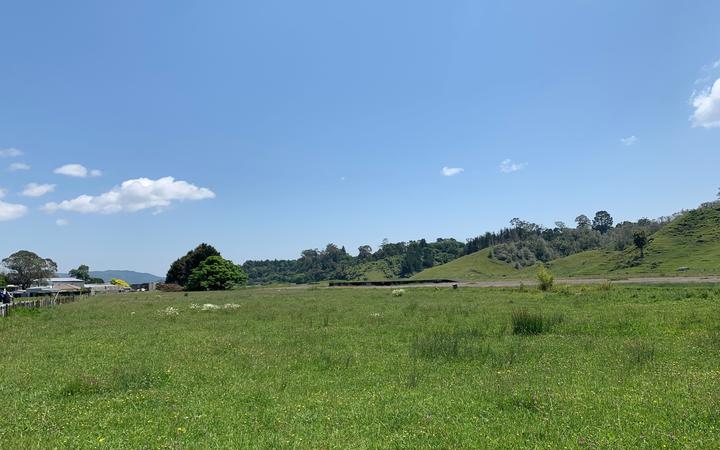 Tuhoe is looking to build its eco-village on this site at the corner of Morrison and Station Roads in Taneatua. Photo: Supplied / Charlotte Jones LDR

Watching the Tūhoe development with interest are Julie Lambert and Ruth Gerzon. The women are part of a private group wanting to start their own co-operative housing plot in the Whakatāne district.

Eastern Bay of Plenty Co-operative Housing is searching for like-minded people to get together and fund their own village, both rural and urban-based.

"We're not trying to reinvent the wheel," said Ms Lambert.

"There are other co-operative housing groups around New Zealand, and we aim to model ours closely on Earthsong in Auckland."

Construction on Earthsong was completed in 2008 and it is now home to about 70 people. With private homes, communal gardens and living areas, Ms Lambert said it offered the perfect balance of both privacy and community.

Ms Lambert said the proposed village could be cheaper for families and would provide a nice environment for children to grow and play in safety.

"With the shared hall one member could put on an activity for all the children on a rainy day," said Ms Lambert.

"It is perfect for those looking for a home with a more community feel, rather than the isolation and possible loneliness we face in communities now."

"With the mix of private and communal living, you don't feel on top of each other, but the support and community are there when you need it."

Ms Gerzon said she and her husband began researching co-operative housing as they got older as they began to find their lifestyle block too much to handle and were missing the company of others.

"It's about people connecting with people, something that is missing in modern life," she said.

"There's an opportunity for people to live in tiny homes, while still having access to a full kitchen, as well as bigger family homes.

"We would like this to be affordable for people so we are hoping some members could build two homes, one of which we could then rent out."

Members would be free to sell their home and leave when they pleased.

The group is now searching for like-minded people to join them and will be holding a public meeting at Knox Church on Domain Road next week.

Ms Gerzon said they are looking for a mix of all ages and people who were prepared to live in a democratic, socially supportive and environmentally friendly community.

The meeting will be held at 5pm on December 3. Those who cannot attend are welcome to contact the group on it Facebook page 'Eastern Bay Cohousing'.