Lobby groups for disabled people believe officials are looking to set a blanket speed limit of 10km/h for all e-scooters on footpaths.

Ride-share e-scooters can be geo-fenced to cut their speed in certain places, such the 15km/h limit imposed in a dozen parts of Auckland under the council's extended trial.

Now, the Ministry of Transport is working on a much broader limit.

"Speed is a safety factor for all forms of transport and e-scooters are no exception," Brent Johnston, the ministry's manager of mobility and safety, said in a statement.

"One of the key proposals under consideration to improve e-scooter rider safety and the safety of other footpath users, is establishing a maximum speed limit for footpaths, with some ability for councils to adjust this to suit local circumstances."

More will be revealed in the ministry's Accessible Streets regulatory package, which was due out by Christmas but has been delayed until early next year.

The Footpaths4Feet Coalition spokesperson Chris Teo-Sherrell said officials would allow both private and rental e-scooters on footpaths with a 10 km/h speed limit - but in his view that was still too fast.

"If there was a speed limit then absolutely no faster than walking - four to five kilometres an hour. There would still be some people that wouldn't be happy with that, but most people could probably live with that." 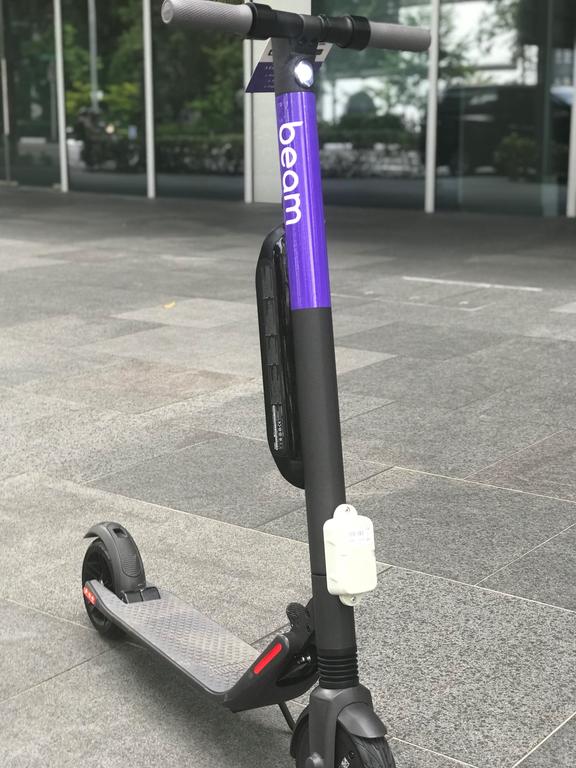 Beam is one of the types of e-scooters on Auckland streets. Photo: Supplied

Jonathan Godfrey national president of Blind Citizens NZ is not among them.

"I've heard talk of various speed limits, but none of them are low enough to make any sense whatsoever," Dr Godfey said.

"Just because someone says 'You can only drive these these e-scooters at walking speed' - what's going to happen when someone zooms past a blind person at up to 30 kilometres an hour? There's no comeback for us. There's no one looking after our interests."

The ministry was belatedly recognising that having e-scooters on footpaths at unregulated speeds was "absurd", but pretending speeds could be limited was also absurd, Dr Teo-Sherrell said.

"Most scooters don't have speedometers on them, so how people are meant to know for sure that they're going under whatever that speed limit is, that's the first thing.

"Secondly, even if they do have speedometers, how is any enforcement going to be carried out?"

He expected another Accessible Streets proposal would be for e-scooters to be allowed into cycle lanes for the first time.

"That seems extremely sensible to us, in fact that's where we think e-scooters should be."

The ministry said any new rules should be in place by the middle of next year.

It had already sought feedback from a reference group that included disability advocates, Johnston said.

But Dr Godfrey was scathing, saying allowing riders on the footpath in the first place, without consultation, was egregious, and they have complained to the United Nations that it breaches the Convention on the Rights of Persons with Disabilities.

"Our report goes back to the United Nations in 2020. You know, New Zealand is lining itself up for a smack from the UN for doing the wrong thing to disabled people over these e-scooters."

The lobby groups remain sceptical about what analysis the ministry is doing of e-scooter crashes in New Zealand.

The ministry said the five councils that were running e-scooter trials were giving it feedback that has helped shape policy.

The New Zealand Transport Agency said it was "not specifically undertaking a review as this falls to the councils who are granting the trials".

"If law changes are required this would be via the Ministry of Transport with our input but only at that stage," the agency's said in a statement.

Palmerston North has delayed introducing hire e-scooters to city streets till the middle of next year.

The city council has a permit ready to go for operator Blip, but said the company would not have any e-scooters available till mid 2020.

"We are aware of a proposal to limit speeds on footpaths. Obviously we would need to take that into consideration if it gets mandated," the council's deputy chief executive Chris Dyhrberg said.

"At this stage, however, we're very happy with the permit conditions we have proposed and believe they will give us the ability to monitor and adjust conditions as necessary."