More than 300 of Uber's Jump scooters have been pulled off Wellington streets and piled up ready to be scrapped. 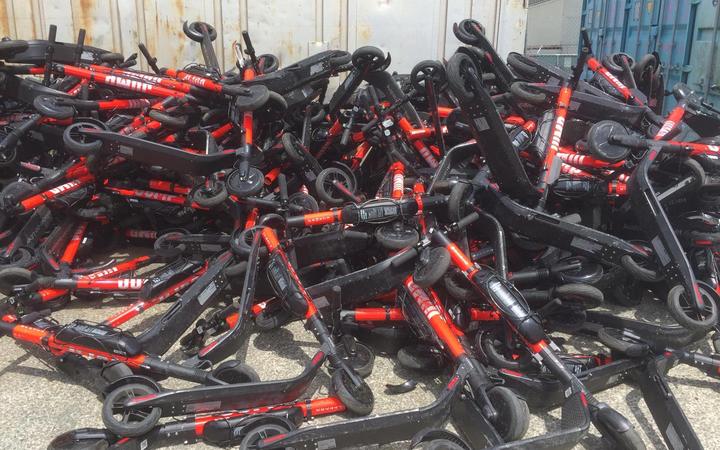 Uber scooters that have reached the end of their life have been dumped in a pile in Wellington. Photo: Supplied

The scooters, some broken down and others intact, are being sent to a recycling company in Auckland.

Uber said the scooters had reached the end of their life after arriving in the capital just six months ago.

The electronic squealing from a pile of e-scooters could be heard slowly dying as the batteries ran flat.

A Wellington man who did want to be named said he had been watching in dismay as trucks pulled up to dump a load of scooters onto a freight company's concrete yard.

"Some of them have still got their batteries in them because the lights are flashing and they are sort of crying away on the ground, it's quite hilarious," he said.

"There is small plastic crates filled to their top with wheels, motors, tyres, everything which has been dumped out as well."

Some looked in very good condition, he said.

"Some of the scooters are brand new, you can see as they are lying on the ground they have still got all the stickers that cover the certain parts like the running boards and switches," he said. 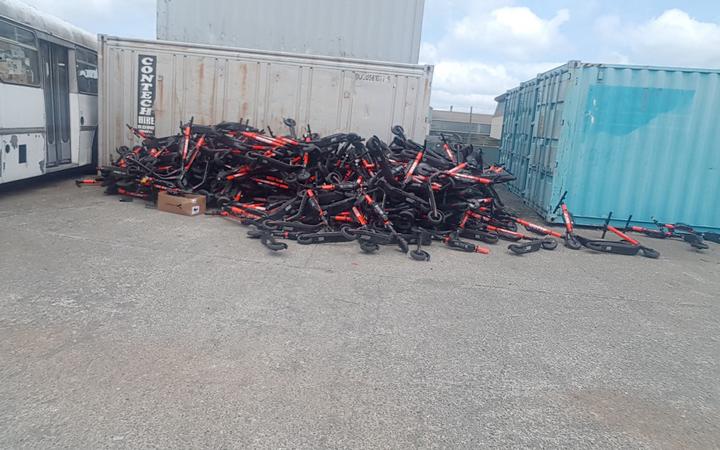 Uber New Zealand spokesperson Henry Greenacre said the scooters had come to the end of their life because of heavy use.

He said this was the first batch to be worn out and sent for recycling.

"We invest significantly in the maintenance of Jump e-scooters and they get a safety check every time they come back to the warehouse," said Mr Greenacre.

"Given our scooters contain batteries and electrical components, it is really important to us that they are properly recycled.

"Our local Wellington recycling partner has taken these e-scooters to their facility to be sorted before being taken to Auckland where components will be recycled."

Uber said it would be replacing the numbers removed from the fleet in the next few weeks.

RNZ understands the new scooters would be an upgraded model.

Some 400 of the Jump e-scooters arrived in Wellington in June as part of an 18-month trial, with a six-month review set for December.