Moving to green vehicles is a small part of Gisborne District Council's work to reduce its carbon footprint, "but every bit helps", Mayor Rehette Stoltz says. 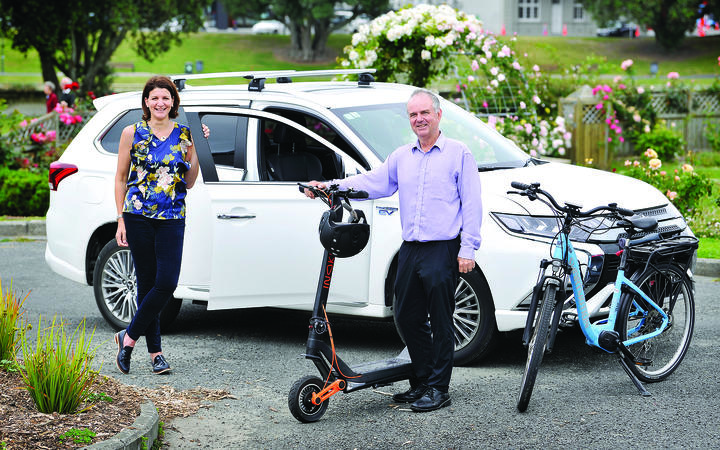 Rehette Stoltz with the new mayoral car - a Mitsubishi Outlander hybrid - and Gisborne District Council asset manager Simon Jeune with one of the council's e-scooters and an e-bike, which are part of a drive to get the council moving in an environmentally friendly way. Photo: Liam Clayton / The Gisborne Herald

The council's first green vehicle - a Toyota Prius Prime that can run on electricity or petrol - was acquired about four months ago.

With a new car due to be purchased for Mayor Stoltz, she was keen for it to be environmentally friendly.

The quiet Mitsubishi Outlander hybrid she had been driving around for the past few weeks was working out well, she said.

It had a battery range of about 55km, and she figured out that was about the distance she consistently travelled when on council business in Gisborne.

The ability to switch to petrol power had helped allay "battery anxiety", and she plugged the SUV in at home overnight so it was fully charged - at a cost of about $3 - for the next day.

Mayor Stoltz said the big focus for the council in terms of climate change was in planning for its effects on infrastructure such as roads and underground utilities.

Gisborne District Council asset manager Simon Jeune said the council had about 70 vehicles in its fleet.

About two-thirds of these were utility vehicles that needed to be four wheel drive and able to travel long distances, and Mr Jeune said there was currently no hybrid or electric vehicle to viably replace them.

The rest of the fleet was made up of passenger cars, and about half of those did not need to travel off-road so could potentially be replaced with green vehicles.

Switching out petrol or diesel cars would occur as each one became due for replacement.

The decision would come down to the potential electric or hybrid vehicle's performance - being able to do what the council needed it to do - and affordability, in comparison to an equivalent petrol or diesel vehicle.

The council had recently purchased two 2016 Nissan Leafs for about $22,000 each.

Along with the two hybrid vehicles, these fully electric cars would have access to three chargers being installed in the carpark at the council building on Fitzherbert Street.

Mr Jeune said electric vehicles had been a consideration in plans for the redeveloped council building, which opened in 2018 with a tube for wiring laid under the carpark.

Another charger would be installed at the council's service centre in Te Puia Springs.

The four chargers were partly funded by a $20,000 grant from the government's low emission vehicles contestable fund in August, with the council also contributing $20,000 to make up the total cost.

In the same round of grants, Eastland Group was given $97,000 to expand its fast charger network in Tairawhiti, including in Ruatoria and Tokomaru Bay.

As well as moving to green vehicles, which would reduce fuel bills, an emissions profile for the council was being worked on, allowing it to monitor its output and track emissions reduction over time, Mr Jeune said.

Council staff also had access to an e-bike and five e-scooters that were plugged in at various departments in the council building, as well as five ordinary bikes.

These have replaced car trips for council staff heading into town for meetings or inspections.

Staff wanting to use e-scooters, which are limited to 300W or 25kmh, must first go through an induction.