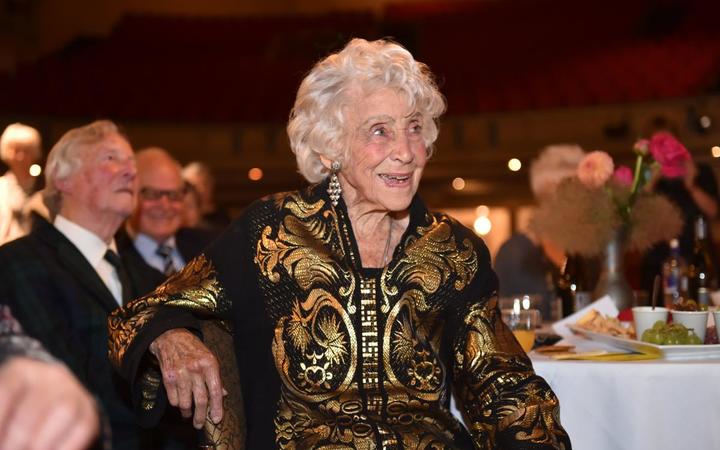 Shona Dunlop MacTavish at a function at the Regent Theatre in 2017. Photo: ODT files

Mrs Dunlop MacTavish was born in Dunedin in 1920.

She travelled to Europe in 1935 and studied with dancer and choreographer Gertrud Bodenwieser and later joined the Bodenwieser Ballet.

As many of the dancers were Jewish, she and others left Europe to escape Nazi persecution.

The dancers were then based in Australia and toured New Zealand during the 1940s and 1950s.

Mrs Dunlop MacTavish witnessed the Nazi invasion of Austria when she was a young student in Vienna, and later she and her missionary husband fled mainland China during the Communist Revolution of 1949.

They went on to apartheid-era South Africa and there, Mrs Dunlop MacTavish was widowed in 1957.

She returned to Dunedin a solo mother of three children, and determined to bring modern expressive dance to her hometown.

In 1958, she opened up New Zealand's first modern dance studios in Dunedin, and continued to be involved in dance throughout her life - teaching and mentoring some of the country's leading artists. She also set up the Dunedin Dance Theatre in 1963.

The Otago Daily Times reported University of Otago Tourism professor and filmmaker Wiebke Finkler in 2009 said Mrs Dunlop MacTavish was "the mother of modern dance in New Zealand and one of Dunedin's treasures''.

Mrs Dunlop MacTavish also became an author, and received an honorary doctorate of literature from the University of Otago.

Her 1997 autobiography, Leap of Faith, traverses significant moments of the 21st Century.

She would choreograph works with social justice themes well into her 80s, and often had them performed in churches, believing dance to be inseparable from her spirituality.

She was made an honorary member of Dance Aotearoa New Zealand at a ceremony at the Regent Theatre in 2017.

Mrs Dunlop MacTavish is survived by her children Terry, Dugald and Catriona, and her companion Louise.

- This story was originally published on the Otago Daily Times, and republished by RNZ with additional reporting.