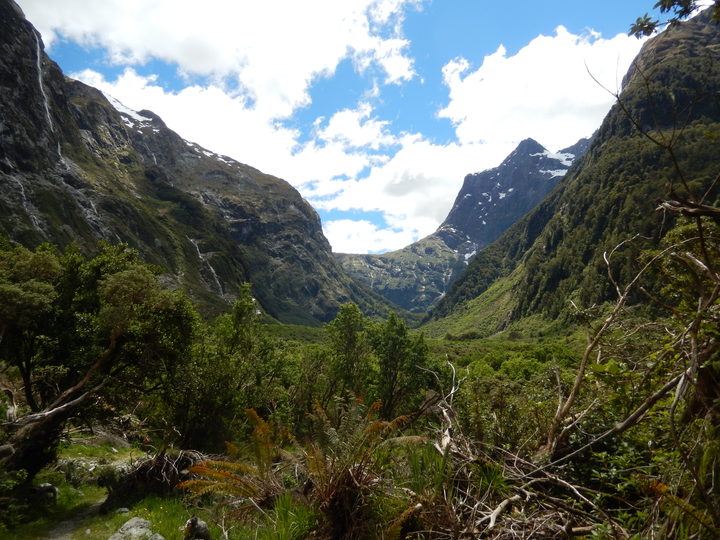 The 73-year-old Japanese woman was spotted at midnight on Saturday with a sore ankle about 300 metres from the Milford Track, at the top of a steep bluff, which her pack had fallen down.

She could not be airlifted last night because of the steep terrain.

Ultimate Hikes general manager Noel Saxon was one of three rescuers on the ground who were guided to her by the helicopter crew, and reached her by 1am.

She was glad to see them, and they stayed huddled up with her until she could be airlifted late on Saturday morning, he said.

"She's tough as old boots and in really good nick, but she had a bit of an ordeal, she's ended up ... down quite a steep area and following a creek, and ended up at the edge of a bluff.

"She'd lost her pack over the side at that point, and just had minimal stuff with her, and was a bit cold. So it was pretty essential we got to her with some warm clothes and food - she was very keen to see us."

She had done the right thing by staying put to wait for rescue, once she realised she was lost, he said.

It was a warm, dry evening, but the four spent an uncomfortable night in the open.

A translator would have to be brought in to find out why she left the track and became lost, he said.

The Kyoto woman was travelling as part of a guided tour with Ultimate Hikes, and was last seen after lunch on Saturday.

Her disappearance was not noticed until after 5pm, as trampers often spread out to walk alone, Mr Saxon said.

An initial search was mounted, and when she could not be found emergency services were called at 6.45pm, and the Southern Lakes Rescue helicopter was sent.