A study into how changes in the colour of street lights affects insects will soon begin in Christchurch's red zone. 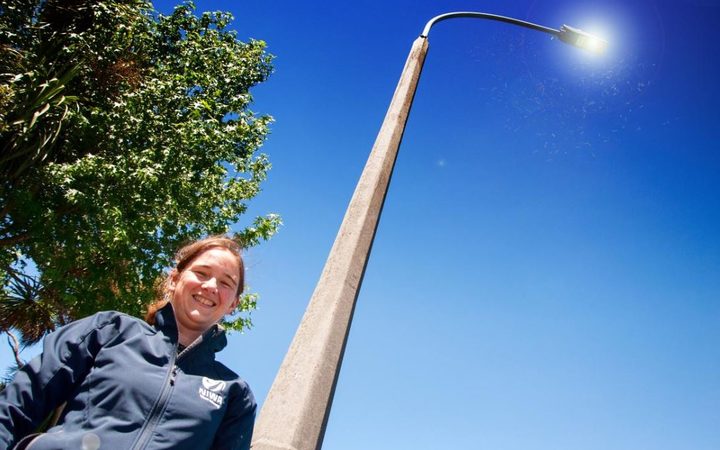 NIWA freshwater ecologist Michelle Greenwood is trying to find out how a change in the colour spectrum of street lights is affecting tiny insects. Photo: Simon Hayes, NIWA

She wants to find out how the change in street lights might affect insects that live in and near freshwater - and the flow-on impact on other animals in the urban environment.

"We know that insects and other animals can be sensitive to the blue light spectrum," Dr Greenwood said.

"They might just fly around and around the light until they're exhausted and die."

"I thought I'd see the city change from yellow to blue, but what I'm seeing from above is almost the city disappearing because the new lights are so well shielded.

"There is a lot less light to see above the street lights and that's really positive."

Dr Greenwood said insects were indicators of healthy urban waterways, but little was known about how development affected them in New Zealand.

"We don't really know the impacts of the conversion to LED lights, which is why we're doing this study.

"Overseas there have been impacts that have changed all sorts of interactions between animals in urban environments.

"We need to figure out the impacts here," she said.

NIWA research shows there are about 370,000 street lights across New Zealand and about 40,000 in Christchurch.

Dr Greenwood and her team will look at insects emerging from the Avon River and other urban waterways to see how they behave around the lights.

"The really great thing about this is that by using areas in the red zone, we can carry out our experiments in a real-life, operational scale setting.

"It's an area where the houses have been removed, but the street lighting infrastructure remains intact."

The first test will involve sheets of clear perspex coated in a sticky substance being mounted next to lights to catch insects.

These will be replaced daily.

The study is the pilot for a three year study.

This longer study will include the creation of an interactive web page, where users can virtually change the lighting of areas in Christchurch to see what the city would look like under different scenarios.

Scion is also developing drone-mounted sensors that will map light temperatures at an "insect scale".

Dr Greenwood hopes the research findings might be applied nationwide.

The project is funded through the Ministry of Business, Innovation and Employment's Endeavour Fund and undertaken in conjunction with Scion, the University of Canterbury, Christchurch City Council, NZTA and LINZ.