There have been testy scenes at Parliament this afternoon during Question Time, with National's deputy leader thrown out of the House. 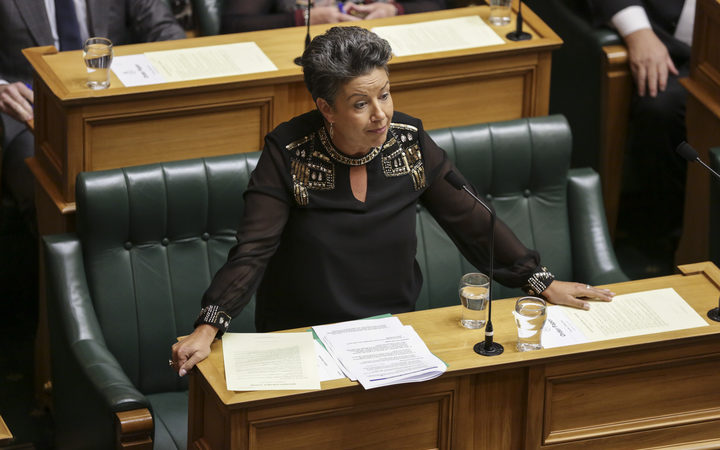 National's deputy leader Paula Bennett was ejected from the House for interjecting and after she questioned the speaker about why she was made to apologise for yesterday's storm-off. Photo: RNZ / Richard Tindiller

Yesterday, the National Party issued a furious letter to Parliament's speaker Trevor Mallard, a Labour MP, demanding he explain his role in a story about an alleged sexist remark.

Today, National's deputy leader Paula Bennett was ejected from the House for interjecting and after she questioned the speaker about why she was made to apologise for storming out yesterday in frustration over the speaker's actions.

Ms Bennett said she did not feel Mr Mallard's actions were unnecessary but he had a right to do so.

"Ah well these things happen, if you can't take it then don't give it. That's the way things go, and he's completely within his rights as speaker to demand that I leave. I felt it was necessary, I didn't think it was over a big deal," she said.

Other National MPs were repeatedly asked to withdraw and apologise for remarks they were making during Question Time.

Mr Mallard made no explanation today, in response to the National Party's letter, for his role in the story about the alleged sexist remark.

Since becoming speaker, Labour's Trevor Mallard has introduced a new system of discipline - deducting questions from MPs who interrupt proceedings.

The alleged sexist remark, which led the National Party to issue a letter about, was first reported last week by Newshub but no source was given.

Mr Mallard confirmed on Wednesday those were the words he heard. The audio recording of the incident is unclear and National's MPs have denied saying any such thing.

Mr Brownlee said "promoting stories about events which cannot be verified" was unacceptable for the Speaker, whose job it is to "take a neutral role" and make sure Parliament runs effectively..

"None of us heard it and none of us said it," he said.

"The only person who says he heard it is the speaker and we are concerned about why some days after it had been dealt with, it's now back in the media."

And he took umbrage with Mr Mallard calling an MP a "naughty child" and allowing another to be called a "fool" without intervening.

National also had concerns about the "arbitrary way" Mr Mallard was running Parliament saying it was "seriously limiting" its ability to hold the government to account, Mr Brownlee's letter said.

Mr Mallard rejected that accusation yesterday, telling National MPs that under his "disciplinary" system their party had received an extra 22 supplementary questions so far this term.

National said its confidence in the speaker had been "severely shaken".

A spokesperson for Mr Mallard said he would not be making any comment to the media about the story.