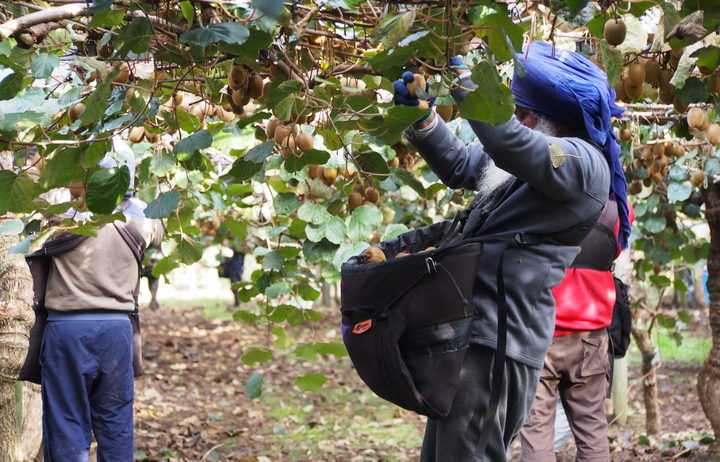 At least half of the kiwifruit contractors who have been audited or investigated in Bay of Plenty have failed to provide employment contracts or pay the minimum wage, a Ministry of Business, Innovation and Employment (MBIE) report found.

Union Network of Migrants national organiser Dennis Maga said the union was told last year that international students were being picked up out of Auckland to earn as little as $2 an hour to pick kiwifruit.

"There was an arrangement they would be paid between $2 to $8 an hour in exchange for contacting those fruit picking companies."

He said the majority of migrant workers he knew of working in kiwifruit picking in the Bay of Plenty were Indians and Filipinos.

Mr Maga said the reason those migrants accepted such poor working conditions was because they were often desperate.

"Some of these international students have been looking for jobs for a long time in order to pay for their food and accommodation.

"These companies, especially the labour hire companies, are trying to exploit this situation."

Mr Maga said he was sick of hearing about investigations, like the one announced yesterday, because it showed exploitation of migrant workers was not letting up.

He said there were about 60 inspectors for the whole country, whereas in Australia there was about 600.

"It's too easy to get away with not complying with basic employment law in New Zealand.

"That gets even easier when you're employing migrant workers because they might not know the legal system in New Zealand," Mr Sissons said.

Mr Sissons said almost 50 percent of the agriculture, forestry and fishing industries' workforces were migrant workers and he believed some were not speaking out about dodgy employers because they were scared to lose their job.

"We'd like to see immigration New Zealand taking a more pro-migrant worker stance and saying 'if you come to us and report these things, you won't be deported, while we investigate this stuff and we'll try and help you find another job in the industry."

Labour Inspectorate regional manager Kevin Finnegan said their investigation found more than half of the companies they looked into were failing to provide the minimum wage, correct holiday pay or simply giving workers written contracts.

"They're paid by the bin. If you don't manage to pick enough bins to receive the minimum wage ... it has to be topped up by the contractor.

"We found a few cases where that wasn't happening."

He said the inspectorate hadn't gone back this year to check the companies they had investigated.

"We've been in other regions doing other different operations, but there will always be a follow up."

Mr Finnegan said there was one case of a company owing staff $25,000 that was paid back once the inspectorate raised the issue.

He said it was likely the lack of written contracts was also disguising more cases of workers being short-changed out of minimum wage.

Punishments dished out ranged from an improvement notice to immediate $1000 fines, while one company is being taken to the Employment Relations Authority.