Greypower, unions and opposition parties have joined forces to call for an end to what has been labelled "disgusting" food served in Dunedin Hospital. 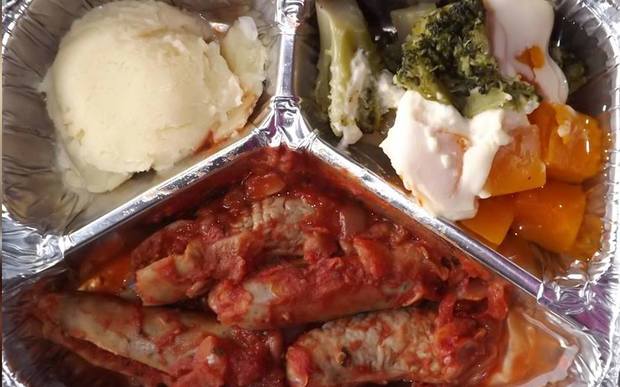 A Southern DHB volunteer described this meal, provided by the Compass Group, as "incredibly salty" and "very watery". Photo: SUPPLIED

A group made up of Grey Power Southland, Unions Southland, Unions Otago, the Labour Party, the Green Party and New Zealand First is calling for the Southern District Health Board to end Compass Group's contract to provide hospital meals in the far south.

Dunedin Hospital's patient meals have faced a barrage of criticism since Compass began a 15-year contract in February.

The individual groups and parties had formed the coalition because they had all received complaints from people about the new food, the new coalition's spokeswoman, Anna Huffstutler, told Checkpoint with John Campbell.

"From all reports [the food is] pretty horrific... We hear reports people can't eat it, it's just disgusting.

"It's just continually - it's not getting any better. From some reports it's actually getting worse."

The food was previously prepared in-house and was sourced from local ingredients, a model which Ms Huffstutler would like to return.

But, as a money-saving move, Compass won the contract. Many of the the meals were now trucked frozen from the North Island, for reheating in Dunedin and Invercargill including for Meals on Wheels.

The food has been defended by Health Minister Jonathan Coleman, who even ate a meal himself.

But critics said it wasn't the same food patients were being served.

Ate a tasty nutritious meal at Dunedin Hospital, pasta bolognaise, the same as what patients had for lunch pic.twitter.com/t5vlfiGfGu

Here are two #Compass meals - one was served to a patient yesterday, the other given to @jcolemanmp last week. pic.twitter.com/JnyJ9Ibkpi

Southern DHB Chief Executive Carole Heatly said some of the information being circulated didn't provide the whole truth of what was being served.

"Clearly there are a number of patients who are not satisfied with the food they are receiving and we acknowledge their concerns.

"However, Compass advises that their patient satisfaction survey indicates that 75 percent are satisfied with or neutral about the meals."

Five other DHBs received the same menu, so it was unclear who Southern District Health Board's clients were disappointed while others weren't, Ms Heatly said.

Ms Huffstutler was involved in the consultation period, prior to the DHB taking on the contract.

She said she was told the food would look better, taste better and meet national nutritional standards, but none of that had eventuated.

"The savings we were told they were going to make over a 15-year period was only $7 million, and that was on the basis that all DHBs throughout New Zealand joined this national contract.

"I don't believe that $7m in the bigger scheme of things, especially compared to ensuring that people in hospitals and in the community are receiving good, nutritious, pleasing-to-the-eye-food, is really worth it," she said.

"We would like the DHB to consider, seriously, to end the contract with Compass. It's not working. It's failing."

Ms Heatly said Compass had been listening to feedback the DHB had given it, and had made a number of changes as a result.

"These include making changes to menu items and cooking processes, and putting additional resources into the front line to take feedback directly from patients and rectify issues immediately through their patient experience coordinator roles. We are seeing improvements as a result.

"We are committed to ensuring the best possible service to our patients, and will be closely monitoring the performance of Compass to ensure this happens."

The coalition has called a combined protest for next Friday outside Dunedin Hospital.