The ageing ASB tennis venue is letting the country down as a destination for international tennis, says Tennis Auckland.

About 60,000 people passed through the arena during this year's tournament, but next year could be the last with the stadium in its current state with plans to demolish two stands for a more than $16 million dollar upgrade.

Tennis Auckland chief executive Brent Robinson said with parts of the venue ageing Auckland was struggling to keep up with overseas tournaments.

"We've got a couple of stands that are 60-years-old and that, and the infrastructure around it, means we don't actually meet the criteria required from the WTA (Women's Tennis Association) and the ATP (Association of Tennis Professionals) to host these events. So the venue is a real issue for us."

WTA and ATP require a centre court venue capacity of at least 3500. Auckland has a capacity of 3000.

He said the venue also did not meet the lighting requirements and each year organisers apply for an exemption just to hold the tournament.

"They work with us, they know we're working on improving it, but to be fair they've probably been hearing that for a few years, and we've been getting those exemptions for a few years, and they are asking us more and more when is the rubber going to hit the road on making some of these improvements." 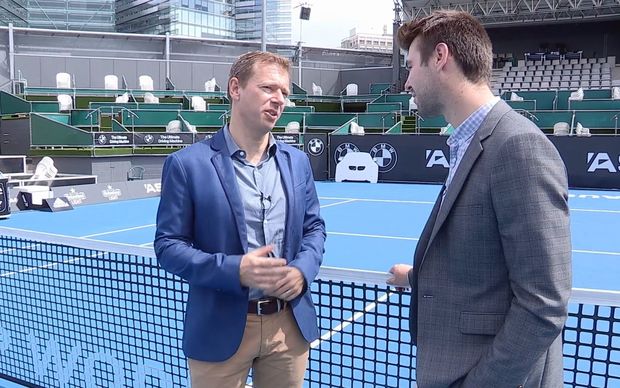 With the ASB classic in the first fortnight of January and in the lead-up to the Australian Open, Brent Robinson said the tournament had to upgrade to compete for players.

"As well as events in China etc these are the events we're competing with to bring down the world class athletes that we bring. And more and more we're getting left behind in terms of being one of the few venues without covered courts, can't guarantee that match play etc."

The plan is to pull down the two old Yock and Robinson stands and replace the seats, bolstering numbers by around 800 people.

A retractable roof would go across the centre court.

The increasingly popular on court Hawk Eye technology is not part of the redevelopment.

"It's an expensive investment, it's $120,000 for a fortnight to put Hawk Eye in. And that's a lot of tennis racquets in kids hands and all those sorts of things, so those are the sorts of something we need to weigh up.

"We are aware there's a bit of a call for Hawk Eye and it's something we look at year in year and will no doubt be looking at again."

Mr Robinson said only around a third of money had been raised, with money coming in from the Auckland Council, a Foundation North grant and other funders.

With the $16.5 million base budget and construction hoping to get underway next January immediately after the 2017 tournament, Mr Robinson said there was still work to do.

"We do need the support of public funders for this project. Tennis Auckland is a not for profit sport entity and as much as that means that we own and deliver the ASB Classic we're also responsible for growing the game, getting more kids picking up racquets in schools, so as a not for profit entity we need the support of public bodies to get this project across the line."

Tennis Auckland applied for resource consent for the project at the end of November. It's hoping to have it approved by the end of this month.