Wellington's 100-year-old ceremonial "key to the city" has gone missing from its sealed museum case. 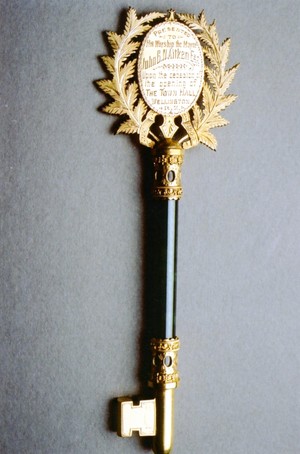 The key made of pounamu and gold was donated to Wellington in 1904. Photo: WELLINGTON CITY ARCHIVE

The Museum of Wellington City and Sea discovered the pounamu and gold key missing a couple of days ago during its daily security checks.

The artefact worth $8500 was a gift by jeweller Frank Grady to the capital in 1904 to mark the opening of the town hall.

Paul Thompson, the museum's head of content and deputy director, said the key is believed to have been stolen and staff are upset because of its immense historic value.

"We feel very attached to all our objects, especially a really unique, rare object like this," he said.

"It's like your own house is burgled. You feel violated, people have come into your space. They've intruded into your lives."

Mr Thompson said he was puzzled by its disappearance as the key was too identifiable to be sold and it was not worth melting for its gold.

The museum's cases are sealed with silicon and screwed down, so it couldn't have been a grab-and-run type job, he said.

"The person must have had tools of some sort. They would have used a knife or scaple to break the seal on the case."

The museum has informed police and has reviewed CCTV footage, but it has failed to provide any clues.