An expedition by two young Waikato University students to conquer the world's four largest ice caps has been launched in Hamilton.

Zac and Josh Lyon describe themselves as adventure enthusiasts. The 22-year-old twins plan to ski across Greenland, Patagonia and the South and North Poles, in back-to-back seasons. 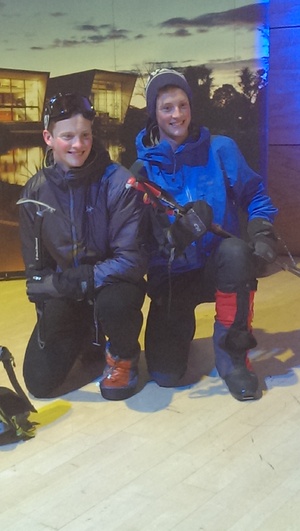 The brothers set off on 17 August on the first stage of the trip, a 540-kilometre trek across Greenland. The journey is estimated to take 25 days and will be in temperatures ranging between 5 and -30 degrees Celsius.

The two men have been to Norway to hone their ice trekking skills but under guidance. Now they face the task of testing the limits of physical and mental endurance by themselves, pulling everything they need on a sledge behind them.

Josh Lyon said it was about testing their own boundaries.

"I have the firm belief that your mind controls your body, so at the end of the day when you are physically exhausted it's going to be down to your mental fortitude to see if you can come through it."

He said they thought they knew what they are letting themselves in for.

"When we are actually on the ice and it's day 39 we'll probably look back on it and say we weren't quite prepared for this but we try to prepare as best we can for it, that's all we can do from here."

In Greenland the pair will be climbing 2500 metres during the trek and Zac Lyon said, it was heading into winter and the freeze would be starting.

"The snow might be a little bit soft to start with but once we get higher onto the plateau things will start being a lot colder and therefore a lot harder, more ice and possibly more weather systems rolling in. We have some pretty strong winds we have to contend with."

The team director for the 4-Caps expedition, Rob Hammil, knows all about endurance and mental fortitude.

He and the late Phil Stubbs smashed the world record for rowing the Atlantic in 1997.

On first being approached by the brothers about what they wanted to do, Mr Hammil was a little incredulous.

"I will always give someone the time of day if they have the gumption to even pick up the phone. You got to give credit for that. Then you have to look if there is any substance behind the talk and it didn't take me too long to realise these guys are really substantial characters."

Mr Hammil said while he thought the brothers had what it took, both mentally and physically, time would tell.

"To be fair it's an unanswered question for those two because they are going to have a moment and several of them potentially, along the course of this expedition where they may wish they hadn't started because for whatever reason something happens and they are in a situation they didn't want to be in, but that's when the test begins."

Zac Lyon said they have the full support of their family to undertake the adventure.

"I know Mum is a bit concerned we won't come home, but no, they are all very supportive."

After Greenland, the Lyon brothers will tackle a 2000km trek to the South Pole and back next year, followed by Patagonia in 2016 and the North Pole the following year.