Brazilian fans were decked out in green and yellow, while the German contingent, some with painted faces, waved flags as they watched the World Cup semifinal on a large screen at the Brazilian Embassy in Wellington.

But it wasn't long before a deep gloom descended on Team Brazil as they were thumped 7-1 by a rampant German side. At halftime, the score was 5-0. 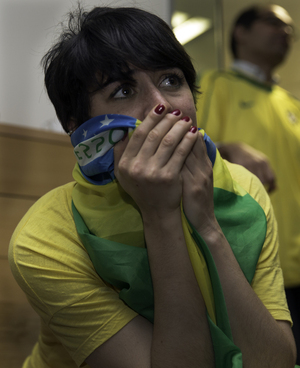 A Brazil fan reacts to the team's 7-1 defeat to Germany in 2014. Photo: RNZ/Diego Opatowski

One of them, Manoel Medeiros, said the loss was a big disappointment. "We always put pressure on our team - no matter how they score. We always want to win but we know that things not always that way. Sometimes we need to lose to learn something from that."

One New Zealander, decked out in Brazilian colours, played a drum throughout the match.

"I'm just trying to generate a bit of enthusiasm and create an atmosphere, really, trying to fit in with the crowd."

It was the Germans shouting and cheering for most of the match until the last few minutes when Brazil finally got on the scoreboard.

German ambassador Anne-Marie Schleich said she was excited to see her country in the final. 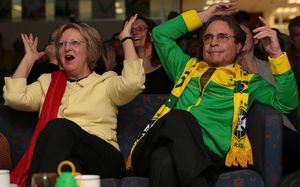 "Today really shows that the team is in very good form - much better than four years ago."

It said New Zealanders bet more than $1 million on Wednesday morning's match, the highest amount in the tournament so far.