The men had used the boat to travel to and from Hamilton's Fieldays agricultural fair.

Three of the men were clinging to the floating dinghy and were rescued by a police boat. 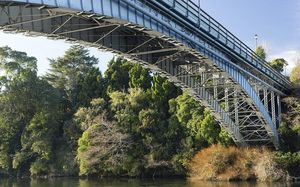 Five men were rescued from a capsized dingy on the Waikato River on Friday night. Photo: PHOTO NZ

Another man, adrift from the dinghy, was rescued by a waka crew in training, and a fifth made it to shore alone.

All five were treated for hypothermia.

Sergeant Pete van de Wetering said the men were not wearing life jackets and had been drinking alcohol.

He said the river was running faster and higher than normal, making it dangerous, and at least one of the men found clinging to the boat was minutes away from being sucked under.