The trial of Epsom MP John Banks started later than scheduled on Monday after a protester threw a bucket of mud over the politician as he approached the High Court in Auckland.

Mr Banks is charged with knowingly filing a false electoral return during his failed bid for the Auckland mayoralty campaign in 2010. He denies the charge. The trial was delayed for 90 minutes so he could change his clothes. 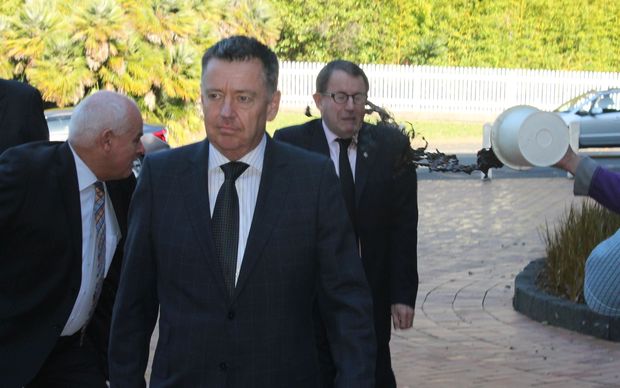 John Banks being hit by a bucket of mud at the start of his trial. Photo: RNZ / Kate Newton 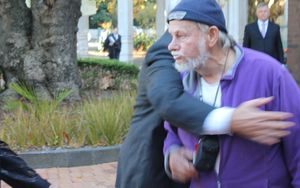 The Crown's case is that John Banks knew that internet businessman Kim Dotcom made a donation of $50,000 and SkyCity donated a further $15,000 to the mayoral bid.

John Banks' lawyer David Jones says his client did not know that the return was false and is not guilty of filing a false return. The charge carries a maximum prison term of two years or a fine of up to $10,000.

Prosecutor Paul Dacre told the court on Monday that Mr Banks knew who sent the cheques but recorded them as anonymous in the electoral return he signed before it was sent to the authorities.

Mr Dacre said Mr Banks met with Kim Dotcom at the latter's mansion in Coatesville, near Auckland, and Mr Dotcom told his head of security to organise a $50,000 cheque for the MP.

"Mr Banks intervened and asked the cheque should be split into two cheques, each of $25,000, so that he would not have to declare where they came from. Mr Dotcom says he was a little offended by this explanation," Mr Dacre told the court.

The man who handled finances for Mr Banks' mayoralty campaign gave evidence and said he didn't ask the candidate about anonymous donations.

Lance Hutchison, a bank manager and Justice of the Peace, said his job as treasurer was to look after the finances, while Mr Banks' job was to get votes.

Mr Hutchinson said Mr Banks only asked if the return was accurate, and Mr Hutchison made the call on whether to list a donation as anonymous.

"I prepared the return ... and arranged to meet him for a coffee. Basically, we just sat side by side and he didn't look and read the return, the expenses."

Mr Hutchison said when it came to signing the return, he held the document and Mr Banks signed the last page it without reading the donation section. He said Mr Banks relied on him to get it right.

Veteran Auckland activist Penny Bright said the mud-throwing incident had nothing to do with her and her small group of fellow protesters outside the court.