The Himalayan Trust founded by Sir Edmund Hillary has launched an appeal for the families of sherpas killed in Mount Everest's deadliest disaster.

The bodies of 13 Nepali climbers have been found after the avalanche just above the Everest base camp on Friday, and three men are still missing, presumed dead.

Rescuers believe the sherpas were knocked into crevasses or trapped under snow while preparing the route for climbers. The search was called off after helicopter sweeps and teams scouring the area on the ground on Friday and Saturday found no sign of the missing men. 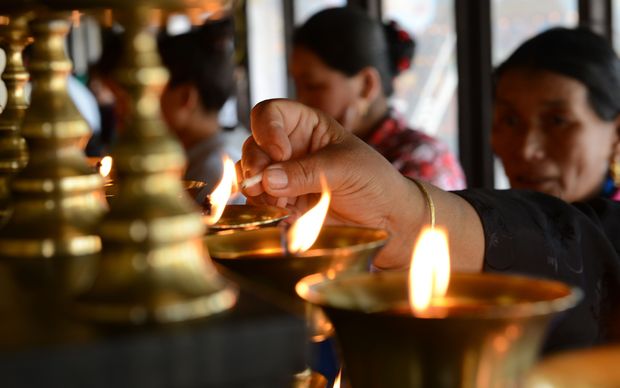 Family members at the Sherpa Monastery in Kathmandu. Photo: AFP

"We have called off the search operation. It not possible to find the three missing persons, dead or alive," Lakpa Sherpa of the Himalayan Rescue Operation told Reuters.

Rescuers brought six bodies from the base camp to Kathmandu at the weekend and have kept them at a sherpa Buddhist monastery in accordance with tradition. The rest were handed over to families in the Solukhumbu region where the accident took place.

Ang Tshering Sherpa of the Nepal Mountaineering Association said cremations would be carried according to sherpa traditions on Monday.

The Himalayan Trust is asking for donations to support the families of the men killed and provide education scholarships for their children.

Chairman Mike Gill told Morning Report the families of sherpas are totally dependant on income from their dangerous job. "They will no longer have any money. We're particularly concerned about the children ... there's one pregnant mother, her husband has died."

The number of fatal accidents on Mt Everest has risen in recent decades, although it dropped last year. The government has issued 334 permits this season, up from 328 last year, with a similar number of guides assisting - and often doing precarious work fixing ropes and ladders to make the mountain safer for their clients.

The sherpas ethnic group has helped foreigners climb the country's towering peaks since before Sherpa Tenzing Norgay and Sir Edmund Hillary became the first to reach the top in 1953.