The Ministry of Health is defending stockpiling the anti-viral drug Tamiflu and says it will continue to use it in the wake of research casting doubt over its effectiveness. 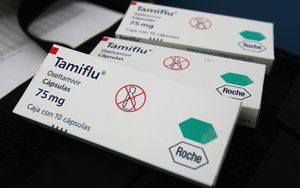 A study published on Thursday says there is no evidence that the drug reduces complications from flu, hospitalisations or death.

The Cochrane Review, backed by the British Medical Journal, says even in people at higher risk of complications, like children or the elderly, they found no evidence of a beneficial effect.

The study is calling on governments and health policy decision-makers worldwide to reconsider the wisdom of stockpiling Tamiflu.

Carl Heneghan, Professor of Evidence-Based Medicine at the University of Oxford and one of the report's authors says there is nothing to suggest that Tamiflu is helpful.

But the Health Ministry says the findings are not the full view and are insufficient to make it reconsider stockpiling the drug in New Zealand. It says it has got more than 1 million doses of Tamiflu and 300,000 of another anti-viral drug, Relenza, worth $32 million.

New Zealand, along with the rest of the world, stockpiled Tamiflu and Relenza during the global H1N1 (swine flu) pandemic in 2009. The drugs are still used to treat serious cases, to reduce pressures on hospitals in winter and save lives.

Drawing on previously unpublished data, the study says there is no good evidence to support claims Tamiflu reduces hospital admissions or complications from flu. It says there are small benefits in relieving symptoms but it's also not clear whether Tamiflu can stop people spreading flu.

However, Medsafe general manager Stewart Jessamine says the study does not cover all available information about the drugs.

"At the end of the day, this is a product where there is good data and clinical use data in acutely unwell patients that demonstrates that it does have an impact on the severity of the disease and the risk of dying as a consequence of influenza when it is used in hospitals."

Dr Jessamine says the study's findings will be considered.

Influenza expert Associate Professor Lance Jennings says the study appears to focus on negative factors and is not broad enough.

"This is an upper level meta-analysis in that it looks at the overall outcomes for these studies and doesn't build down to a lower level and focuses very much, I believe, on the negative aspect of their findings rather perhaps some of the positive aspects."

Dr Jennings says he has an open mind about the study, but Tamiflu and Relenza have undoubtedly saved lives in New Zealand.

Medical researcher and New Zealand Cochrane fellow Vanessa Jordan says the release of data held by drug companies shows that Tamiflu and Relenza are largely ineffective and governments should insist on seeing all clinical trial data before buying drugs to avoid being hoodwinked again.