The $2.5 billion plan provides upgrades for transport to and from the airport with a rail corridor and additional express bus service. 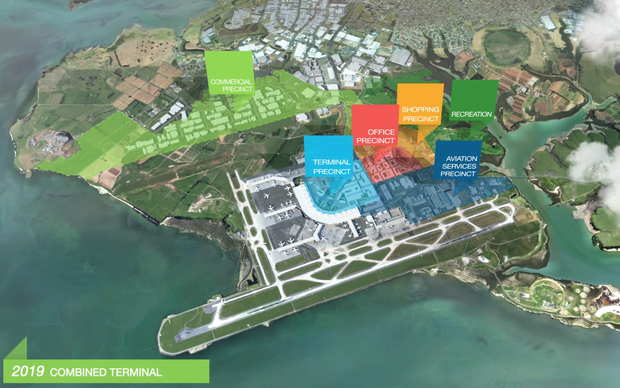 Domestic and international terminals would be combined under the 30-year plan. Photo: AUCKLAND AIRPORT

A second runway, north of the new terminal and parallel with the existing southern one, is likely to be built by 2025.

Auckland Airport chief executive Adrian Littlewood said it will be used mainly for the modern, larger and quieter international aircraft, such as Airbus 320 and Boeing 777. The long-term plan allows for the runway's extension after the 30-year period.

Work began on a new runway in 2002, but was stopped due to a drop in demand during the global financial crisis. 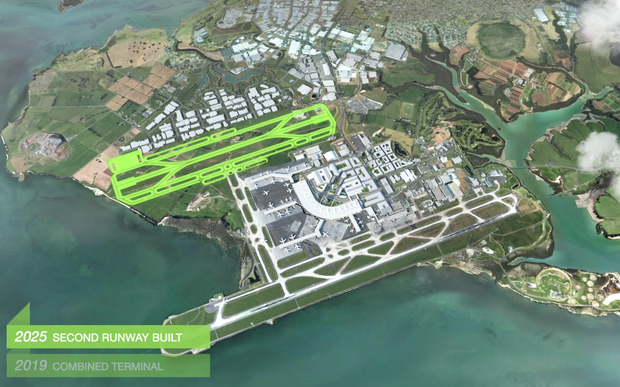 The second runway would be used for larger aircraft. Photo: AUCKLAND AIRPORT

Auckland Airport predicts the number of travellers using the airport will almost treble from 14.5 million last year to 40 million in 2044.

The project is expected to create more than 27,000 full-time jobs.

Auckland Airport says it's working closely with Auckland Council and the Government to make sure significant development of transport to and from the airport is co-ordinated.

The airport company is setting aside land for a rail corridor through the airport precinct to the terminal and an underground station. It has plans for an additional bus service, extra bus lanes and improved facilities for local buses and shuttles.

Mr Littlewood said the airport contributes $3.5 billion to regional GDP at present, and this is predicted to grow by $2 billion, as calculated by Insight Economics. The expansion project will also help lift Auckland household incomes by $1.4 billion, he said.

He said the development programme will enable it to increase job opportunities for students in South Auckland. Last year the airport signed an agreement with the Manukau Institute of Technology to provide internships to students and some have resulted in full-time jobs.

Kim Campbell from the Employers and Manfacturers Association said the programme is grand in scale. "Looking at the domestic terminal now, it's an embarrassment, and the vision is something we can be much more proud of."

Auckland mayor Len Brown said it was a great plan for the people of Auckland, especially those living in South Auckland. Auckland's Chamber of Commerce and the Board of Airline Representatives New Zealand also praised the plan.