The Government's external spying agency is denying it had help from the United States National Security Agency in rewriting the law governing the way it operates.

In testimony to the European Parliament, American whistleblower Edward Snowden said the US National Security Agency has a foreign affairs division that searches for loopholes in other countries' laws to justify indiscriminate, mass surveillance. 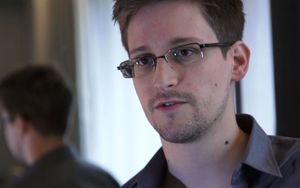 Edward Snowden made his claims in testimony to the European Parliament. Photo: AFP / The Guardian

Mr Snowden said such operations have occurred recently in Sweden, the Netherlands, and New Zealand.

The Prime Minister's Office said John Key stands by his past comments there is no mass surveillance of New Zealanders by this country's intelligence agencies.

The GCSB legislation, passed in August last year, made it legal for the country's foreign intelligence agency to spy on New Zealanders when assisting other law enforcement agencies.

"It was clear that the Government had assistance with the drafting of that bill in order to not only close the loopholes with regards to domestic espionage but to open, or to take advantage and exploit existant loopholes in domestic legislation which is exactly what the National Security Agency did in the United States," Mr Buchanan said.

"Until I see evidence that the NSA was pressuring New Zealand or making strong suggestions that they toe a particular line, then I will believe that that wasn't the case."

In a statement, the GCSB said the implications about the 2013 GCSB legislative amendments were not true.

"The GCSB legislation built on the compliance review (itself a matter of pubic record), which had identified the need to create a clear and consistent statutory framework, to strengthen the external oversight regime, and to address current and future areas of threat," the statement said.

"Cabinet papers, the regulatory impact statement, the bill, all submissions and the responses to those submissions are publicly available. New Zealand laws are the responsibility of the New Zealand parliament. We do not use partners to try and circumvent the law."

Edward Snowden, a former NSA contractor, fled the US last year after leaking thousands of documents that revealed his employer's extensive surveillance programmes. He faces spying charges in the US, but has been given asylum in Russia.