Television New Zealand says it will be looking at its processes after broadcasting false statements on its Breakfast programme. 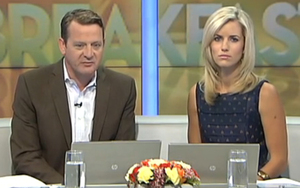 In a report on online bullying on Tuesday, the broadcaster aired various staff reading abusive comments they had received while working for the company.

On behalf of the programme, presenters Rawdon Christie and Alison Pugh apologised on Thursday morning after it was revealed comments by two staff including long-serving presenter Peter Williams were not genuine.

The programme told viewers the broadcaster was taking the matter seriously and dealing with it appropriately.

Television New Zealand's chief executive, Kevin Kendrick, says Mr Williams misunderstood what he was asked to do and thought the item was intended to be comic.

A review is already under way into claims of possible political bias at Television New Zealand, after the general manager of its Maori and Pacific unit, Shane Taurima, used TVNZ premises for a Labour Party hui.

He has since resigned.