About 100 activists have staged what they call a "funeral procession" through central Wellington to protest a lack of Government protection for Maui's dolphins. 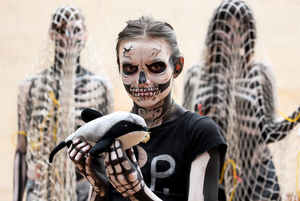 Organiser Christine Rose said they were protesting against the Government's new restrictions on the use of nets on the West Coast of the North Island.

Ms Rose said the measures are inadequate to protect the remaining few Maui's dolphins left in the world.

She said the Government should also ban gill-net fishing, seismic testing and seabed mining in the area.

Ms Rose said the species can cope with only one death every 10 to 23 years, but about five Maui's dolphins die due to human activities each year.