An exotic plant that takes years to flower and produces a rotten smell is blooming at the Auckland Domain Wintergardens.

The highly anticipated blooming of the Amorphophallus titanum or "corpse flower" began on Saturday. The spathe was unfurling, showing its deep burgundy interior.

The Titan arum, which blooms only once every seven to 10 years, has been growing in the Auckland Domain Wintergardens for seven years. 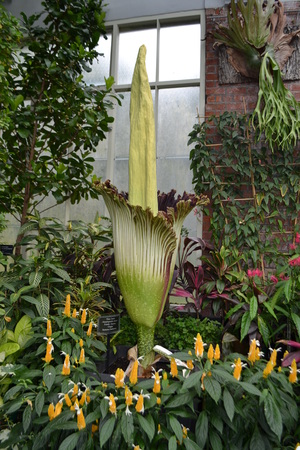 The flower is sometimes known as the corpse flower because it produces a smell like rotting flesh when in bloom.

It began opening at approximately 2pm on Saturday and would continue to open overnight.

The 2.5 metre high plant is likely to give off its signature rotting flesh smell when the bloom is fully open.

Auckland Council said public visiting hours will be extended from Sunday. The Wintergarden will open at 6.30am and remain open until dusk, while the flower remains open. The bloom typically lasts for up to two days.

Wintergardens spokesperson David Millward said it will be the first time the plant has flowered in New Zealand. He is warning visitors to be prepared for the stench, which is believed to be quite overwhelming.

The smell is strong enough to spread for two to three kilometres, attracting insects the plant needs to pollinate it.

Amorphophallus titanum is from the Sumatra forest in Indonesia.