Police say an officer's son was not part of a core group of teenagers who have been boasting online about sex with intoxicated girls.

Police have been monitoring the Auckland group of 17- and 18-year-olds who called themselves Roast Busters since 2011, but say they do not have enough evidence to pursue charges unless one of the girls makes a complaint.

They believe some of the girls are as young as 13, and have identified some victims who did not consent to the sex but chose not to give a formal statement to police. 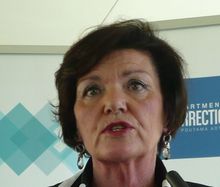 Waitemata district commander Superintendent Bill Searle said on Tuesday that an officer's son was a member of the group but did not take part in any of the sexual activity.

Mr Searle says the police investigation has not been affected by the family relationship.

"I totally refute that. I think if you have a look at the experience of the police in recent years - particularly my district - you'll see that we've taken a very, very strong line with any police officers or family members that have been involved in any wrongdoing. And we've got a track record of holding those people to account."

He says the young man was able to give police some information about other members of the group.

Mr Searle says police are aware of vigilantes that are threatening the group. He says he understands the outrage the group has caused, but police will take action against anyone who uses threats or violence.

Police Minister Anne Tolley says the Police Commissioner has assured her that the involvement of the officer's son hasn't in any way affected the way police have approached the case.

Police have brought in a senior detective from outside Auckland to help with the case.

A Crown lawyer says it would be difficult to prosecute the group of young men. Simon Moore, QC, told Radio New Zealand's Nine to Noon programme on Tuesday such cases are hard to prove without a complainant, even though the statements online could be viewed as an admission.

"It's just as admissible, in fact some might say that that kind of statement may well carry a greater weight in terms of its veracity than something that was said to the police."

However, Mr Moore says a complication is having to sift bravado from truth in comments on social media.

Justice Minister Judith Collins said there are no gaps in sexual offending laws and nothing wrong with current criminal legislation.

"If you're talking about sexual violation cases in a general sense, I'm not aware of any gaps in the law relating to that. The fact is, is that it's a very difficult charge to prove primarily around the issue of consent. Not all victims want to come forward, not all victims want to go to the police."

Ms Collins says new cyber-bullying legislation being introduced in Parliament on Tuesday would allow victims to seek help from Netsafe or a similar advocate to get online content removed, but would not help deal with primary sexual offending.

Labour Party leader David Cunliffe is questioning the way police have handled the group and wants to know what steps were taken to protect the innocent.

Mr Cunliffe says Labour will support new Government cyber-bullying legislation, but says it would not help victims to come forward and make complaints.

Judith Collins says it is irresponsible of MPs to weigh in and police should be left to do their investigation into the young men.

School Trustees Association president Lorraine Kerr says the issue is a huge concern for schools and parents and is worried other teenagers might try to copy the group.

Ms Kerr told Radio New Zealand's Morning Report programme the young men are all someone's sons. "They belong to somebody. It's also getting to the parents - do the parents actually know what their boys are doing?"

She says schools do everything they can to ensure the safety of all students, but there is little they can do about activities outside school hours.