An external audit will examine not only spending during the mayor of Auckland's two-year affair, but also whether the woman involved received preferential treatment.

Len Brown says he doesn't believe he has any worries on either front and, in his first public engagement on Monday, said Aucklanders wanted him to get back to work on the real issues. 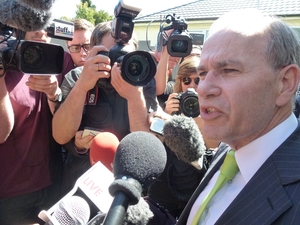 Len Brown says he won't be stepping down as mayor. Photo: RNZ

Mr Brown resumed mayoral duties after much of his first week after re-election was spent confined to his Town Hall offices and spoke to media for the first time in a week about his affair with Bevan Chuang.

The mayor re-affirmed his intention to remain in office, saying Aucklanders want him to get on with the issues facing the city. However, he said he regrets his decision to conduct the relationship.

"Of course you do - life is not without regret," he told reporters. "You make your decisions and when you make a stupid decision like I did, you've got to live with that and try and find a way forward. And that's exactly what we're doing."

Mr Brown says hotel rooms used by himself and Ms Chuang were paid for, and that supporting her application for a job at the city art gallery was not an abuse of power.

External auditors Ernst and Young will ensure that ratepayers' money wasn't used during the affair, as well as checking how Bevan Chuang was treated in roles on the council. In addition to being a member of the Ethnic People's Advisory Panel, she worked for three months at the gallery and also had a four-month contract working for the Howick Local Board.

The terms of reference for the council inquiry into the mayor's conduct and spending during the time the affair happened are expected to finalised soon. The council hopes the review can be completed within four weeks.

Len Brown says he believes the review will find nothing untoward. "I'm very confident that there should be nothing that would show that we didn't pay, or I didn't pay, for what was appropriate in terms of those hotels."

Mr Brown said Aucklanders want to be assured that the city is moving on. "They have supported me most recently in the election only a week ago. All of these issues, clearly, my wife and I need to work through and we're doing that. But otherwise I'm focused on the job of getting Auckland moving."

The mayor attended an informal gathering of newly elected councillors instead of a scheduled visit to Three Kings Primary to support a milk in schools programme on Monday morning, before visiting an environmental show home in Ellerslie in the afternoon. His next public engagement will be on Thursday evening.

Meanwhile, it is still unclear exactly what Mr Brown's failed mayoral challenger John Palino knew, and when, about a blogger's revelations about the affair. Mr Palino has issued a statement saying suggestions he is orchestrating a conspiracy to unseat Mr Brown are absurd. He has not returned calls since.