Former Auckland mayoral candidate John Banks was always kept at arm's length from campaign finances, a court has been told.

Mr Banks, who is now the ACT party leader and the MP for Epsom, is in the Auckland District Court defending claims of electoral fraud. He is specifically accused of recording donations for his campaign as anonymous, despite knowing they were from SkyCity and internet businessman Kim Dotcom. 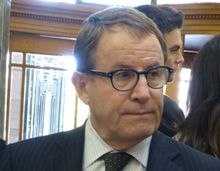 Police decided in 2012 that there was not enough evidence to lay charges, but a private prosecution has been brought by retired Wellington accountant Graham McCready. The court is deciding if there is enough evidence for the case to proceed.

A campaign worker, whose details cannot be made public, told the court on Tuesday that the identity of donors was not important.

He said Mr Banks did not read the electoral return listing his donations, but asked if it was true and correct before it was signed.

The man said there was no need to discuss campaign finances with Mr Banks unless they were short of cash, and donations were properly declared line-by-line.

Anonymity 'not sought' in SkyCity donation

SkyCity chief executive Nigel Morrison testified in court that, to his knowledge, John Banks's Auckland mayoral campaign team did not ask for a donation from SkyCity to be anonymous.

Mr Morrison told the hearing on Tuesday he made clear to both Len Brown's and Mr Banks's campaigns that he was giving them an equal amount. He says he handed over a cheque to Mr Banks inside an envelope in a meeting at SkyCity that lasted about 10 minutes.

Asked by Mr McCready if it was SkyCity's intention that the donation be anonymous, Mr Morrison

replied that he never personally thought about that. Mr Morrison was also asked if Mr Banks' campaign team asked for the donation to be anonymous. He says to his knowledge, they did not.

Earlier, Kim Dotcom told the court he felt offended when he was asked to split a $50,000 donation in order for it to remain anonymous. He said he had no problem with people knowing he made it, but Mr Banks told him that if he was to help him in the future it was better if no one knew about the donation.