Tame Iti says he will continue to regard himself as a political prisoner.

The Tuhoe activist was jailed on firearms offences related to police raids in Te Urewera National Park in the Eastern Bay of Plenty in 2007 and released from Waikeria Prison on Wednesday morning. 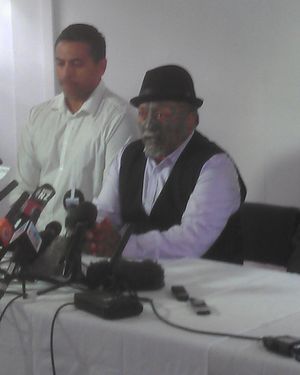 Tame Iti says he will continue to hunt and use firearms because it is part of Tuhoe culture. Photo: RNZ

He has served a third of his two-and-a-half-year sentence. Te Rangikaiwhiria Kemara, Urs Signer and Emily Bailey were also convicted over the raids.

Iti held a media conference at the Hukanui Marae near Hamilton following his release and told reporters he was a political prisoner of the state while in jail and would remain one at large until his sentence was completed in October 2014.

He held no resentment about being in jail nine months, saying he enjoyed his time there and was able to work and be creative with his art.

Iti said he was inspired by reading a book about former South African leader Nelson Mandela and wants to write one on the history of political prisoners in New Zealand.

Once he returned home to Ruatoki, he said he would continue to hunt and use firearms because it is part of Tuhoe culture.

His lawyer Russel Fairbrother said an application has been lodged with the Supreme Court to overturn the conviction and sentence.

Mana MP Hone Harawira was at the marae to welcome Iti and believes he has come out of prison a stronger man.

"I think his mana has been enhanced by what he's gone through because those are lessons you just can't get on the outside. He's learnt from that, he's grown from that - he's a better man for it.

"And we as a people - Maori people in particular - are going to be better off for having a leader like this go though those experiences and come out as strongly."

Mr Harawira said Iti has successfully survived all that the state could throw at him.

Signer said they are waiting to hear if the court will allow them to appeal against their convictions and sentences.