The minister now responsible for the problem-plagued teachers' pay system is not confident it can be fixed but says the Government remains committed to making Novopay work.

The $30 million payroll system developed by Australian company Talent2 has been plagued with thousands of errors since it was introduced in August 2012 with underpayments, overpayments or no payments at all to some teaching staff. 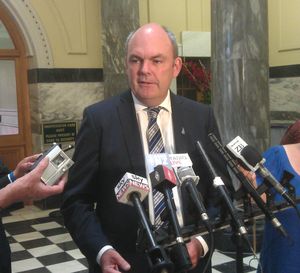 In a Cabinet reshuffle on 22 January, Steven Joyce was put in charge of Novopay and on Thursday announced a ministerial inquiry and a range of new initiatives aimed at fixing the problems, including a technical review.

Official papers released on Friday reveal that the Novopay system was meant to begin operating in 2010, but bugs and problems led to delays.

Mr Joyce said on Friday he is not hugely confident that the problems can be resolved, which is why contingency plans are being considered. However, he said the Government is still working on making Novopay work because that is the system it has.

"We're certainly working with them, we're prepared to put the resources in - largely because we are where we are. It would be unfair to say I'm massively confident, but I've certainly got to make the best of the situation that we're in."

The papers also reveal tension between the Ministry of Education and Talent2, but Mr Joyce said he thinks they still trust each another.

Prime Minister John Key admits the advice his ministers received over Novopay may not have been the best, but said on Friday that doesn't mean Novopay should be scrapped.

The documents show there were serious concerns with the development of the payroll system for at least the past few years, and when ministers signed off on it there were still major faults.

Mr Key said most large payroll systems have some warning bells attached to them.

"But in the end for all of that, we need to ensure that the system operates. It may, as the minister (Steven Joyce) I think has pointed out himself, would be not that easy just to go back to another system that's no longer there. And so in the end, maybe the best solution here is to work our way through what we've got."

The Prime Minister said his confidence in Novopay is still shaky and is apprehensive about the latest teacher pay cycle next week.

The Green Party on Friday questioned what the Government and the Education Ministry were thinking when they approved Novopay. Education spokesperson Catherine Delahunty said both went into this debacle with their eyes wide open knowing full well the system's weaknesses and she can't understand why the ministry is sticking with it.

What the documents reveal

The official documents released on Friday show the Ministry of Education was demanding money back from Novopay as early as November 2012 for failing to meet contractual requirements.

They show there were serious concerns about Talent2 and its performance for at least the past few years and that Novopay failed to meet several deadlines and milestones in the lead-up to the system going live in September 2012.

In November last year, the ministry wrote to Talent2 informing the company it had not met key performance indicators in the contract, worth about $100 million over eight years.

The actual figures and specific breaches have been blacked out. But the letter says the ministry had paid the September invoice in full and wanted money paid back as a penalty for performance failures.

The papers show that the ministry was worried enough to explore getting out of its contract with Talent2 in April 2012 and confirm that there were more than 200 faults in the system in the weeks before Novopay went live.

Talent2 warned the ministry that if it declared there had been a breach of contract, that could derail the project because its parent company would have to make a disclosure to the markets.

The papers reveal that in 2011, Talent2 put pressure on the Ministry of Education to provide it with more money. The ministry balked, saying the contract was to deliver the project for the agreed price. However Steven Joyce, as Information Technology and Communications Minister, approved the extra funding.

The official documents show that the Government signed a contingency contract with former payroll provider Datacom in 2012 to provide back-up in the event that Novopay could not proceed.

The Education Ministry said it had to create a fall-back position with Datacom so it could step in and operate the system for up to five years if Novopay failed.

Also released are letters from the Education Ministry to Novopay expressing extreme disappointment about its performance and a lack of confidence in the company's ability to fix the problems this year.

It told Novopay it was appalled it had not acted to prevent staff being wrongly paid in the pay before Christmas.

Next pay cycle expected to be train wreck

Principals expect next week's pay cycle to be a complete train wreck that will prove that the Novopay system should be scrapped.

However, president Jill Corkin said next week's pay cycle will be the first of the year since all teachers have returned and preliminary reports already show major problems. She believed Novopay can't be fixed and needed to be scrapped.

The Secondary School Principals' Association says the debacle will go on for months rather than weeks.

President Patrick Walsh said the next pay is particularly complicated and is likely to be a complete mess. Mr Walsh wants the Government's inquiry to look at whether due diligence was carried out on Novopay provider Talent2.