An amputee sentenced to 12 months' home detention for selling cannabis to an undercover police officer says there would be economic and health benefits if the drug was legalised for health use.

Billy McKee, 58, was sentenced in the Palmerston North District Court on Tuesday on four charges of selling cannabis and one of growing the drug after a jury earlier found him guilty. 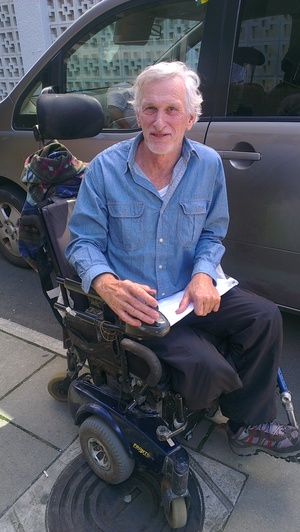 Billy McKee says legalising cannabis for medical purposes would save the country a lot of money. Photo: RNZ

McKee's leg was amputated after a hit-and-run crash when he was 21 and says when conventional drugs did not ease his pain, he began self-medicating with cannabis with his doctor's blessing.

He operated a website advocating the use of cannabis for pain relief and was contacted by an undercover officer to whom he sold the drugs. A subsequent raid on his home revealed more than 60 cannabis plants hidden beneath it.

The Crown sought a jail term on Tuesday but Judge Barbara Morris said that was not required, as McKee no longer intended to continue selling the drug in an attempt to change the law.

McKee hopes that one day that the medicinal benefits of cannabis will be recognised and a safe, regulated market set up in New Zealand that would include education and support so people could be prescribed the proper strength of the drug to remedy their health problems.

He says the Government needs to address the issue of cannabis use, and if it was legalised for medical purposes it would save the country a lot of money.

McKee says unlike conventional drugs, the cannabis gives him a good night's sleep and prevents the hungover feeling he gets from other pain relief.

About 30 people, including some in wheelchairs, protested outside the court on Tuesday advocating cannabis decriminalisation for medical use.

A petition is also being circulated nationwide seeking clinical trials of the drug and for doctors to be able to prescribe it in cases where conventional drugs have failed.

One of those promoting the petition, Waihi resident William Rea, says there would be many benefits if the drug was decriminalised for medical use, including reducing organised crime and gang involvement with selling it.

Mr Rea hopes at least 5000 people will sign the petition before the Green Party presents it to Parliament.