Thousands of people have given the Chiefs a rousing welcome in central Hamilton to celebrate the Super Rugby final win.

In Saturday night's final in Hamilton, the Chiefs convincingly beat the Sharks 37-6.

The players and coaches rode on the back of an open-deck truck and trailer unit down the city's main street to cheering fans lining the roadway.

Ticker-tape cannons sprayed streamers in their path as the parade slowly made its way through three blocks to an official welcome in Garden Place. 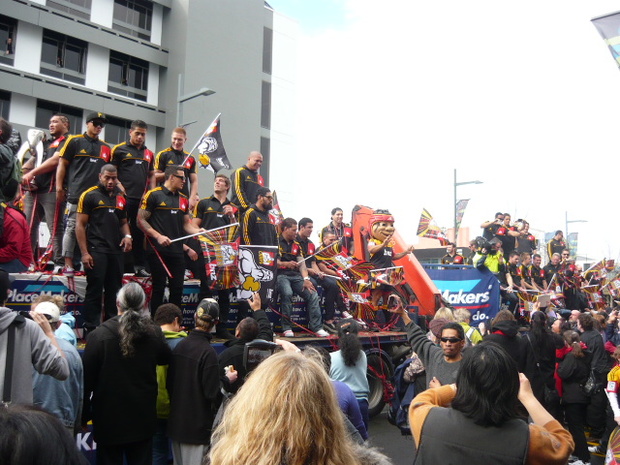 There the team was welcomed with a haka and congratulated by Hamilton mayor Julie Hardaker.

The players were introduced to the crowd and then did an impromptu haka, especially written for them.

Earlier, police in Hamilton asked Chiefs fans to be their eyes and ears in helping solve the burglary of the team coach's home during the final.

Dave Rennie's home in north Hamilton was broken into just before 11pm on Saturday.

He says the news was gut-wrenching and took the gloss off the win for him.

"A lot of things that we lost were pretty personal to my wife," he says, "so she's pretty upset."

Mr Rennie says a safe was taken that contained distinctive gold jewellery - bracelets and a necklace.

Police say they hope the strong community support behind the Chiefs can be harnessed to find those responsible.