Timaru's mayor says the decision by shipping companies to bypass the town can be partly blamed on dairy cooperative Fonterra redirecting most of its cargo to the Port of Lyttelton three years ago.

Maersk and Hamburg Sud have announced that from 17 September this year, they will no longer call at the South Canterbury port.

About 85 permanent and casual staff at PrimePort Timaru are likely to be affected, with up to 50 container wharf workers set to lose their jobs. 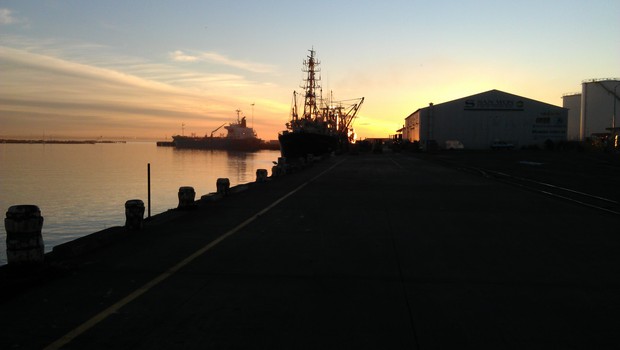 The port at Timaru. The South Canterbury Chamber of Commerce says a strong local economy is producing more exports than ever. Photo: RNZ

The ships will instead travel directly between Otago and Napier and containers will be offloaded at Port Chalmers near Dunedin or Lyttelton and sent to Timaru by rail.

Maersk says the move is based on poor financial returns which it could no longer sustain.

Ms Annear says she asked the dairy cooperative to leave some product at the Timaru port to ensure that the container operation continued.

PrimePort Timaru's board will meet with the Rail and Maritime Union to discuss redundancies next Wednesday.

Town a victim of recession - Maersk

"The smaller ports around the world wherever they do rather come under the microscope.

"If a port is not generating substantial volumes and, therefore, capable of generating the economies of scale that we need, one does tend to rather look at it to see if it's warranted. We don't drive the cargo - the cargo drives us."

Mr Bevis says that while visits to Timaru are ending, direct port calls to Nelson and Wellington will begin from mid-August this year.

However, local exporters believe the shipping companies' move is short-sighted.

South Canterbury Chamber of Commerce president Tony Howey says the strong local economy is producing more exports than ever, and it is ironic there won't be a shipping line to take the increased trade.

Mr Howey, a farmer and exporter, says it remains to be seen whether the diminished rail network will be able to cope with increased loads to transfer goods from Lyttelton and Port Chalmers.

The Chamber of Commerce believes agricultural exporters will face significant extra costs when the ships stop calling at Timaru and some members will have to pay an extra $800 to send a six-metre container by rail to be collected from another port.

The Otago Chamber of Commerce says the move will benefit the local economy.

Chief executive John Christie says he has sympathy for the Timaru workers, but shipping is a volatile industry.

Mr Christie says Port Otago is likely to experience changes in the future which will not be so positive and he will take the wins when he can get them.

The Council of Trade Unions believes a national central port strategy is needed.