The Meat Workers Union is challenging the legality of lockout notices issued by AFFCO at an Employment Court hearing on Wednesday.

Industrial action at the company's eight plants in the North Island is now into its 77th day. About 500 workers are locked out of the plants, while a further 800 are on strike.

AFFCO has told the court it locked out the workers as a neccessary means to end the long-running industrial dispute.

Lawyer Mark Hammond says the company was frustrated by court proceedings, separate to the industrial dispute over the collective contract, and wanted flexible working arrangements that would benefit the workers, and the company.

He says the lockout notice was issued as a means to continue bargaining with the aim of reaching an agreement.

But the court also heard that AFFCO had a flexible lockout plan that allowed some workers to return to its plants when they were needed, only to be locked out again.

Union lawyer Peter Cranney told the court if the company needed workers during the lockout it would unlock some of them, and then relock them when then they were no longer needed.

He says AFFCO allowed workers to return to work only if they resigned from the union and signed a new contract.

The union is seeking a permanent injunction on the lockout notices, which it believes are unlawful.

General secretary-elect Graham Cook says the notices have been used to weaken and undermine collective bargaining and the union wants legal costs from AFFCO and any lost wages during the dispute to be paid to workers.

The parties have had facilitation meetings - the highest form of government mediation - but to no avail.

The hearing is expected to end next Tuesday, but it is not known when the court will announce its decision. 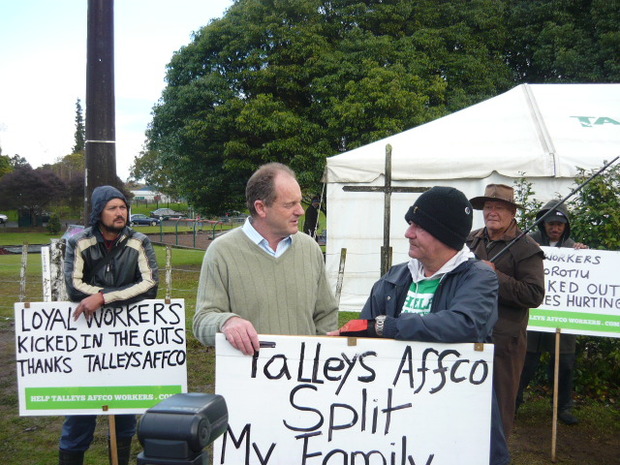 Labour Party leader David Shearer has told picketing workers at an AFFCO plant that the dispute must be settled as soon as possible.

Mr Shearer made his first visit to the picket line at Horotiu plant near Hamilton on Wednesday morning.

He told the workers that they had right on their side and it was the determination of AFFCO management, with tacit support from the Government, to break the collective agreement that was dragging the dispute out.

Mr Shearer says the dispute should have been resolved 77 days ago.

"These people are hurting badly, because of that their families are hurting. I think it could easily be resolved, but it needs some more give on the side of the employers to actually sit down and talk."

Mr Shearer says the workers are wanting to negotiate.