Bill English focused on family, the future of the country's children, and the women on his team in a campaign launch responding to Jacinda-mania. 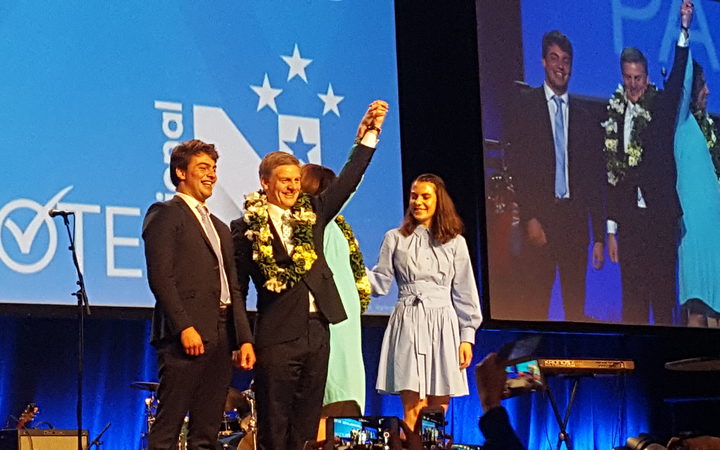 Describing National as a party that cared about people, and announcing details of a new education package, he also praised his deputy Paula Bennett as an example of someone who could connect with and inspire young New Zealanders.

Walking out to his campaign song in Auckland yesterday, Mr English brought the more than 2000 people at Waitakere's Trusts Arena to their feet, as they chanted 'Bill, Bill, Bill."

Flanked by his wife Mary, Mr English was presented to the party's supporters as a strong family man with six children - his daughter Maria sang the national anthem.

Mr English's speech largely focused on National's record in office over the past nine years, and warnings of what could happen if it wasn't elected to its fourth term in government.

Mr English also announced an education package - a four-point plan that included an expansion to National Standards, digital academies and internships for senior secondary students, more resources for maths and a guarantee that all primary school pupils wouild be able to learn a second language if they chose to.

"National is always looking to the future. Our teachers and our schools work so hard to create opportunities for our children."

"These measures, implemented by a re-elected National government, will further push ahead for our children."

Mr English made sure the women in his cabinet had a starring role in the launch.

Mrs Bennett touched on the popularity of Labour Party leader Jacinda Ardern, telling the crowd that voters would choose substance over style.

She said they had been hearing a lot about "selfies and smiles", but what New Zealanders wanted in a prime minister was someone who was proven under pressure.

National's education spokesperson Nikki Kaye emphasised Mr English's experience and attention to detail, and said they were fighting for the future of New Zealand.

"We are fighting for a stronger country. One where the gains that have been made over the last few years... are not lost."

Outside the launch, party faithful said they were focused on policy, not personality and said they appreciated Mr English's efforts to stamp out Labour's Jacinda-effect.

Mr English said in 26 days, voters would have an important choice between two very different visions for New Zealand.

He said National was focused on helping families get ahead.

More policy is expected to be rolled out over the next four weeks.