F-bombs, lipstick on pigs and the PM's pimples

New Zealand’s longest serving political leader suddenly signed off this week warning that superficial stuff seemed to be drowning out real politics in the media. Week one of the election campaign showed he’s got a point.

Peter Dunne wasn’t the only party leader calling out politics as a bit superficial this week.

But because he managed to do so without reference to farm animals and cosmetics, people didn't freak out about it like they did when Opportunities Party leader Gareth Morgan called the enthusiasm for Jacinda Ardern “lipstick on a pig” on Twitter.

Sure but it's pathetic isn't it?All that matters is policy.Jacinda should be required to show she's more than lipstick on a pig.Will she be?

For Al Jazeera, that blurt on Twitter by the political newcomer overshadowed the retirement of the ten-term parliamentary veteran and cabinet minister Peter Dunne.

Across the ditch, lipstick-gate was on a par with the “baby question” sexism controversy a fortnight ago.

"The tweet prompted an outcry similar to the furore created when the 37-year-old was asked less than 24 hours after she took up the leadership role if she planned to have children," the ABC reported.

A similar outcry? Not quite.

But when prompted by journalists, Bill English certainly seemed to take it extremely seriously.

"If you have got an attitude like that I don't think anyone in public life would want to work with him," the PM said sternly.

Meanwhile the OpportunitIes Party people were telling anyone who would listen it wasn’t misogyny - just a turn of phrase other politicians and commentators have used before without much controversy.

Gordon Campbell on scoop.co.nz pointed out that  “lipstick on a pig” was a political line with a long history and not usually deployed with sexist intent.

"When people who actually wear lipstick are involved, the inevitable suggestion is that the person concerned is a pig"

The pig IS the established political party Jacinda Ardern leads, the Opportunities Party protested. Jacinda Ardern was actually the lipstick, they said.

"I could have said something a bit more 'Gareth Morgan'," said Gareth Morgan at a press conference to set the record straight.

"I could have said it's like polishing a turd," he offered.

Less likely to be called out for sexism - but not much more classy.

An irritated Gareth Morgan went on to say there was a bright side to this: journalists were turning up to his press conferences to hear him talk about actual election policies which were more important.

But there wasn't much about policy in reports of that press conference. 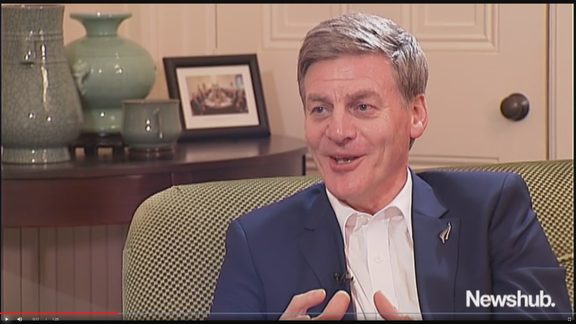 Bill English revealed his acne anguish in an up close and personal chat with Newshub. Photo: screenshot

Those were policy announcements by Labour and National, and Claire Trevett went on to say Bill English might also have obscured National’s announcement on doctors' visit charges with a surprise admission that he struggled with acne as a teenager.

That came during another piece of personality politics: a lengthy up close and personal “At Home with Bill” interview for Newshub.

Many reckoned Bill English’s ancient acne anguish was a pitch for the youth vote, but if so it won't work on 22 year-old Newshub feature writer and columnist Verity Johnson.

“I've never been impressed with their honesty, integrity, or the policies that are firmly designed to appeal to the middle-class, white, 55-year-old, house-owning male voter,” she said in a column last week condemning all party leaders.

This week she said the lipstick on a pig tweet proved Gareth Morgan was not voteworthy either.

“He just lacks the social intelligence necessary to make the leap from private genius to public figurehead," she said.

But in fact the white, multiple house-owning male Gareth Morgan is one leader with policies designed to penalise the wealth of himself and his peers - especially their houses.

That was point he made in his press conference on Wednesday, but it was entirely overshadowed by "lipstick on a pig".

“The Act leader’s F-Bomb” was the top story on RNZ.co.nz on Wednesday evening.

David Seymour swore at a NZ First MP talking about about re-nationalising parts of the energy sector at a conference, making headlines almost instantly.

But if the outrageousness of NZ First's energy policy was an issue, that's odd. That policy has been in the NZ First manifesto since the last election.

But it was yet another blurt in the heat of the moment from another political party leader that got the media going - not any debate over policy.

In this climate it's no surprise issues like power pricing policy, inequality and housing didn’t cut through in a week in which party leaders provided a steady stream of headlines about f-bombs, polished turds, pimples and pigs with lipstick.