Despite the fact they are not out of the woods yet, cattle farmers are starting to consider life after Mycoplasma bovis. 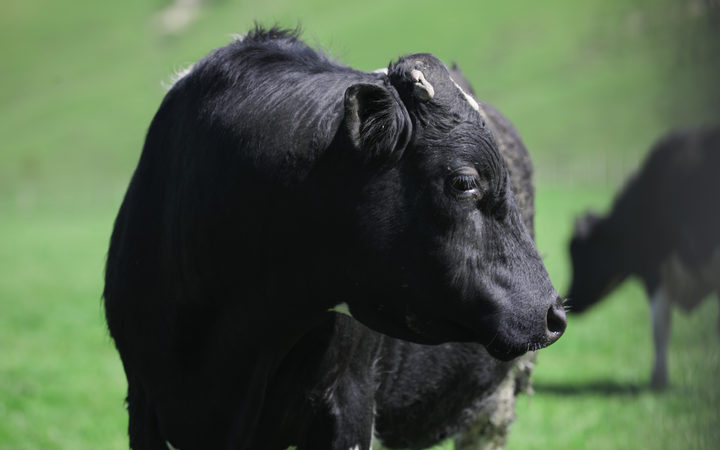 A special Beyond Bovis seminar in Hamilton is set to help farmers look at the future while Mycoplasma bovis takes a hold. Photo: RNZ / Richard Tindiller

Finding that pathway will be helped by a special Beyond Bovis seminar in Hamilton later this month - held in conjunction with the Waikato A&P Show.

The government is working to eradicate M bovis and so far more than 43,000 cows have been culled.

Mycoplasma bovis was first detected in New Zealand by MPI in 2017.

Since then 72 farms have tested positive for the disease. Thirty five of those farms have now been cleared of their stock and been declared safe to repopulate, which left the number of actively infected farms at 38.

The government announced a recovery package this week, aimed at simplifying the compensation process.

But Waikato livestock manager Doug Lineham said it would only address what was in front of the industry right now.

He said the single strain nature of the disease meant they had been chasing a common enemy, and therefore a crisis had been avoided.

However, it did not address what he said was the crisis among farmers who had failed to book-keep around traceability.

He said it was beginning to show in other areas.

"A pivotal point for us is that 70 percent of all cattle born in New Zealand are born on a dairy farm, so if we turn that around the other way, the commercial beef industry now rely for seven out of 10 animals on the dairy industry," Mr Lineham said.

"The dairy industry is effectively the nursery for the commercial beef industry, and that's the point people need to think about."

Mr Lineham said it was here that traceability issues really came into play.

"You'll see in the figures being released by MPI that while the number of dairy farms infected is remaining static at the moment, the number of infected beef farms is increasing and that's because the tentacles of traceability are now moving out further and further, as the animals born on a dairy farm are moving through the beef finishing industry."

Agriculture and Biosecurity Minister Damien O'Connor said earlier that the Nait animal tracing system was hard to use, and had instructed officials to fix it.

He also signalled a tougher approach to enforcement, which would mean changes in legislation.

Mr Lineham said farmers should simply not pay for cattle unless the right documents were provided at the point of sale.

He was also director of Showing Waikato, which was staging the one-day seminar at this year's Waikato A&P Show. He said the goal was to rebuild and strengthen the New Zealand cattle industry in the wake of the cattle disease that has caused widespread heartache.

There had been so much talk about M bovis - not all of which was correct - and it was time to get the record straight and start looking to the future, he said.

"So if they can eradicate it, let's look at life after bovis - whether it's gone or if we have to live with it," Mr Lineham said.

"That's the purpose of the event, to make sure that we can come together and catch up with our mates and the industry, have a bit of time off-farm and listen to all sides of the story."

Mr Lineham said it was hoped those attending would go home confident they understood all sides of the picture and with the knowledge they could carry on with a sustainable and profitable business.

He said the one day seminar was open to all farmers, and anyone with a commitment towards the on-going prosperity of the New Zealand cattle industry.

It would be held at Claudelands Event Centre, Hamilton, on Saturday, 27 October.