The government has put a $1.9 billion mental health package at the centre of its first Wellbeing Budget, to include a new frontline service. 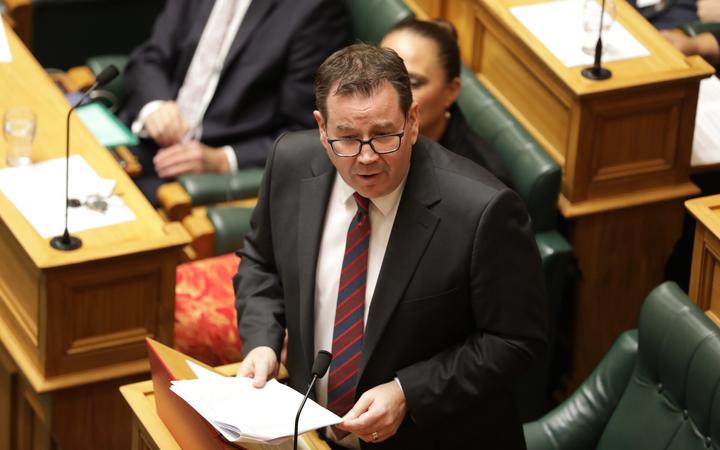 Budget 2019 also allocates $1bn to the rail system, including for KiwiRail to redevelop the network and buy new rolling stock and start replacing the Interislander ferries, gives an $80m boost to Whanau Ora, indexes main benefits to wage increases and provides extra funding for some schools to replace parents' donations.

Watch Grant Robertson's Budget speech and the political reaction in the House here:

A record $1.9bn is allocated for the Mental Health Package over four years.

That means that when a GP identifies a mental health or addiction issue they can "physically walk with their patient to a trained mental health worker to talk", the budget documents say. That person would have an ongoing relationship with the person in distress, to guide and support their recovery.

No details are given about the number of trained workers needed to support this, but the Budget documents say new workforces will be built to support people, and $212m is included for health workforce training and development.

The government says the measures will "transform our approach so that within five years every New Zealander who needs it has access to a range of free services that support and maintain their mental wellbeing."

There is $20m extra for new and existing mental health and addiction facilities.

Nurses-in-schools programmes will also be expanded, to reach an extra 5600 students.

Developing a suicide prevention strategy gets $40m over four years, and eight programmes will be funded for Maori and Pacific communities, to strengthen personal identity and connection to the community.

Many of the initiatives under the government's Improving Child Wellbeing priority had already been announced, including the $320m package to address family and sexual violence, and a $1.1bn investment to help break the cycle of children in state care.

New announcements include confirmation of a $535m package to implement the government's welfare reforms, including indexing main benefits to wage increases, a lift in the abatement thresholds for main benefits to allow people to work more hours before their benefit reduces and the removal of a sanction for failing to apply for child support.

Funding is being allocated for deciles 1-7 schools to replace parental 'donations', removing fees for NCEA and New Zealand Scholarship, and investment in learning support.

KiwiRail is getting a big boost with $1bn to be invested in the rail network over two years.

This includes $375 for new wagons and locomotives, $331m to invest in track and other supporting infrastructure, and $35 million to being the process of replacing the current Interislander ferries that are nearing the end of their lives.

The biggest win for Māori in the Wellbeing Budget is a boost of $80m for Whanau Ora over four years.

The new money will be spent on more Whanau Ora navigators, and targeted support for young Maori.

The funding will be invested in the country's three Commissioning Agencies, but new localised commissioning options will also be developed.

An extra $19.8m will be spent over the next four years on te reo Māori initiatives including the Maihi Karauna, the government's Māori language strategy aiming to have one million people speaking basic te reo Maori by 2040.

Over two years, $14m will be spent developing Māori language content for broadcast and multimedia platforms.

The government says the Budget's $1.2bn commitment to school property is the largest ever made by a New Zealand government.

The funding includes more than a quarter of a billion dollars for three new schools, four school expansions and at least 150 more classrooms.

The government said the remainder of the funding was being set aside to allow the Education Minister and schools to better plan for growth over the next ten years.

The Budget has delivered money to help agriculture meet the climate change targets laid out in its Zero Carbon legislation.

It is injecting $95m in total towards capital funding for science and research on climate change and new technologies.

This is in order for the government to work alongside the industry to invest in research that provides benefits to the sector.

It also allocates $49m to help transform the forestry sector, which takes the total investment in Te Uru Rakau to $58m.

The Budget also provides $4m to help the Ministry for the Environment work on improving recycling and resource recovery.

It allocated $229m for a Productive and Sustainable Land Use package, which is a collaboration between ministers responsible for Agriculture, Climate Change, Conservation, Environment, Land Information, Forestry and Research, Science and Innovation.

This aims to set up the institutions necessary to drive change, but combines them with on-the-ground assistance for land users to reduce their environmental impacts.

The Budget has delivered $150 million dollars for the gun buyback scheme - putting an initial number on what it will cost to bring down the number of firearms in New Zealand.

New legislation that prohibits certain types of semiautomatic fireams, parts and magazines allowed for a scheme to pay compensation in respect of those items now banned.

In March, Prime Minister Jacinda Ardern said the cost would be between $100 million and $200 million-dollars but estimates have since been forecast much higher.

Finance Minister Grant Robertson's Budget noted today that there's significant uncertainty over the quantity of prohibited weapons, which will affect the cost of the scheme.

"This Budget also sets aside $150m for the gun buyback scheme based on initial advice from officials. Any additional funding that is required for the scheme will be sought as needed."

The Budget has delivered funding to address a rapidly changing digital workforce.

A new $300m fund has been established for investing in venture capital markets through the New Zealand Venture Investment Fund, to provide businesses with a sustainable path to grow and develop.

The bulk of this will use a portion of contributions earmarked for the New Zealand Superannuation Fund between 2018 and 2022.

There is $157m allocated to support innovative businesses to develop and commercialise products and adopt new technologies.

This includes $26m to help support, incubate and grow start-ups.

The Defence Force has received a big capital injection for new planes and to replace old buildings and infrastructure.

In total, the extra money in the Budget is $2.175bn for Defence and Veterans Affairs, most of that for the new P8 Poseidon planes which was announced last year.

The funding is being described as the biggest investment in Defence "in a generation".

Capital investments included in the Budget are confirmation of full funding for a new Dunedin Hospital, $1.7bn for building and redevelopment of hospitals, and $190m to help DHBs reduce their debt.

There is also $1.2bn for a 10-year school property programme, and the government has confirmed $1.4bn for the Auckland City Rail Link, including $405.5mto cover the Crown's share of cost increases.

The government is opting to post lower budget surpluses and borrow more as it banks on solid growth to fund its new spending promises.

Budget forecasts show more than $9bn has been trimmed from expected surpluses over the next five years, while it's planned to borrow an extra $5bn.

These will provide the money to fund a total of $15bn of new spending through to 2023, while capital spending on new hospitals, schools, and infrastructure will cost more than $10bn.

The forecasts assume the economy picks up from a slow patch this year to average about 2.6 percent growth over the next few years, while inflation and unemployment remain steady.

However, the government will remain within its self imposed budget spending rules with net debt holding close to 20 percent and overall spending no more than 30 percent of the value of the economy.

The budget offers little for business, with the already announced tax simplification package likely to be the most benefit.

Businesses were given a pre-budget gift in April when the government announced a $187m business tax package, which will simplify the provisional tax regime, which will cut compliance costs and reduce the pressure on small business cash flows.

The extra spending on apprenticeships and vocational training will be welcomed as a step to easing skills bottlenecks, which an increasing number of businesses have identified as holding back performance.

The $64m set aside over the next four years for regional business development and tourism infrastructure will help service-related businesses.

However, the budget will also cost some bigger businesses.

The end of the subsidy for big greenhouse gas emitters, such as power generators, steel makers, and the Marsden Point refinery will cost industry $356m over the next four years, which is likely to pass through to consumer price

RNZ will receive a funding increase from July 1 including an extra $7.25m over two years for day-to-day operations, and $3.5m extra over three years for capital funding.

The operational funding boost includes a one-off increase of $4.5m last year, so it is effectively an increase of $2.5m.

However, the government dumped the previous $6m innovation fund used to help independent producers create specific projects with oversight by RNZ and TVNZ.

TVNZ gets no new funding.

Read the Budget in full: