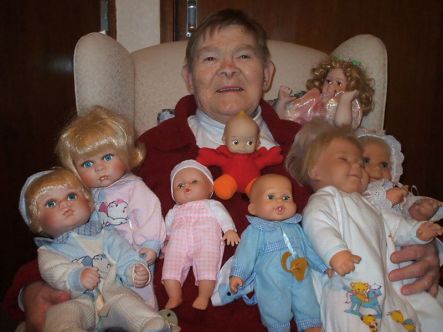 Ngaire Bannan was ten years old when she got her first doll, as a Christmas present. Over 70 years later she has 500, and loves them all. That first doll ended up as a witch, transformed by her mother for a competition. Ngaire is now 81 living in a Tauranga retirement village. 'I still have the little witch', she laughs.

Ngaire has Downs Syndrome and was one of nine children growing up on a dairy farm.

Her dolls are family too, whether they're a metre and a half tall, or no bigger than your thumb. And they keep many of the residents in the Melrose retirement village entertained, particularly the dolls that talk, cry, sigh, feed and then sleep. Melrose therapist Chrissy Currie says a couple of the women there never communicate until they have a doll in their arms. 'Then they come alive', she says.