Our Changing World for Thursday 22 August 2013

Up the Pipe Solutions Project

The Cawthron Institute’s ‘Up the Pipe Solutions’ project is looking at the potential environmental impact of active ingredients in common household products ranging from liquid soap to paracetomol.

Alison Ballance catches up with social scientist Ian Challenger, and eco-toxicologists Olivier Champeau and Louis Tremblay to find out how they have been working with the Kaikoura community to identify the potential toxicity of ten common household chemicals and come up with suggestions for alternative products that might have less of an environmental impact.

The antimicrobial triclosan, which is found in hand washes and toothpaste, came out as one of the most toxic chemicals in the survey. Triclosan's antimicrobial action impacts the functioning of septic tanks and sewage systems, and the team is suggesting that people use less toxic alternatives, such as ordinary hand soap.

The work is funded by the Ministry for the Environment’s Waste Minimisation Fund. 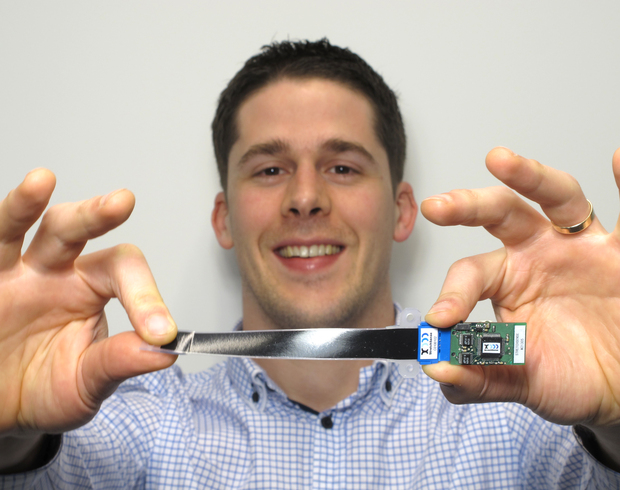 StretchSense CEO Ben O’Brien (pictured above) shows Ruth Beran how the technology works, using a demonstration model with a thin strip, about 12cm long, of artificial muscle (or dielectric elastomer). This artificial silicone muscle was created in the Biomimetics Laboratory of the University of Auckland’s Bioengineering Institute, and can stretch up to about 80%. It stores electrical energy when a voltage is applied and this charge changes when the sensor is stretched, allowing movement to be measured. This data is then sent wirelessly to a smartphone, tablet or laptop. Strips of artificial muscle can be glued, sewn or riveted into clothing, for example a glove or compression sock, and could be used for sports training or rehabilitation. 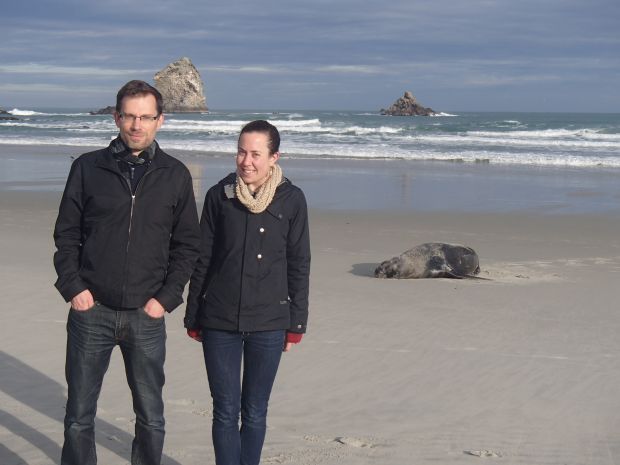 Jon Waters and Catherine Collins with a male New Zealand sealion at Sandfly Bay on the Otago Peninsula (image: A. Ballance)

Zoologist Jon Waters from the University of Otago leads a research team that has been using ancient DNA to challenge our ideas about coastal species such as yellow-eyed penguins and New Zealand sealions. Four years ago work by Sanna Boessenkool showed that the large penguin species that was present when Maori settled New Zealand and subsequently became extinct was a different species from the yellow-eyed penguin that is now present.

Alison joins Jon and PhD student Catherine Collins to hear about that work, and new research that is looking at sealions. 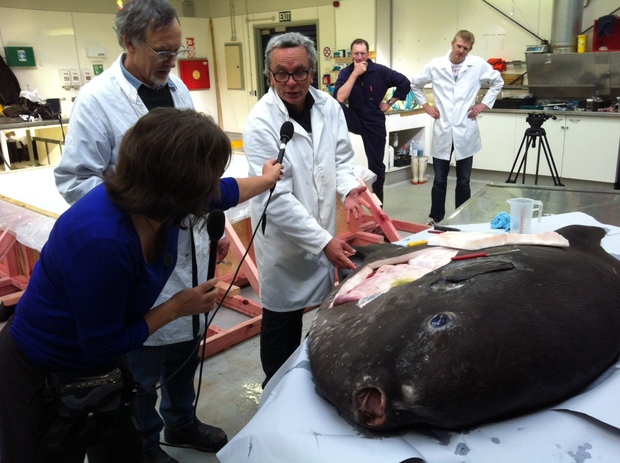 Sunfish are mysterious giants that roam the world’s oceans and are rarely spotted in coastal areas. When a specimen washed up at Omaha Beach, north of Auckland, earlier this year, scientists were given a rare opportunity to study it closely and to add to the scant knowledge of these deep-water fish.

Sunfish are the heaviest bony fish alive today. They can weigh a metric tonne or more and live to 100 years. They favour a diet of small gelatinous animals, such as jellyfish and salps, but are known to snack on algae and small pelagic crustaceans.

The team determined that the Te Papa specimen is most likely a male (although detailed histological tests are yet to be completed) and about 15 years old. Its gut was full of jellyfish, so it wasn’t starving, but its liver showed signs of infestation with worm parasites.

This time-lapse video of the examination and preservation was prepared by Te Papa Tongarewa.