Our Changing World for Thursday 10 February 2011 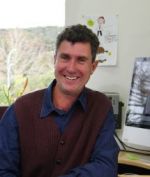 Survival in ever changing conditions requires ongoing adaptation. One way to adjust is to respond to specific environmental cues, but an alternative solution is to keep changing randomly, in the hope that some changes will be successful. The latter strategy is based on bet hedging, a risk avoidance strategy found in all organisms from microbes to humans.

While bet hedging is known to occur, it has been difficult to unravel its genetic background. Using the well-studied soil bacterium Pseudomonas flourescens Massey University evolutionary geneticist Paul Rainey(right) and his team have managed to observe and study the phenomenon in the laboratory. They discovered that bet hedging, or the random switching of phenotypes, requires a sequence of nine mutations, a finding which made the cover of the science journal Nature. In this interview, Paul Rainey explains how bet hedging evolves and why he thinks that it is an ancient evolutionary trait that appeared long before organisms developed ways of sensing and monitoring their environment.

Waikato University's Peter Kamp and Penn State University's Kevin Furlong have been collaborating in research on the tectonic and geological development of New Zealand, and in particular its sedimentary basins, with a view to helping the oil exploration industry find new hydrocarbon reserves. As they explain to Alison Ballance, Kevin has developed the poles of rotation which have allowed them to develop a new reconstruction of New Zealand's geological history. This reconstruction suggests that between 40 and 27 million years ago there was a major rift system that stretched the New Zealand continent and led to its almost complete sinking, and that uplift which began about 25 million years created a large mountain chain in the North Island, the 'Northern Alps', which has since eroded away, filling nearby oceanic basins with thick sediment.

Kevin Furlong has been on sabbatical in New Zealand, spending time at Waikato University and the University of Canterbury, and he has become a familiar face in the media following the 2010 Christchurch earthquake, commenting on matters tectonic and geological. 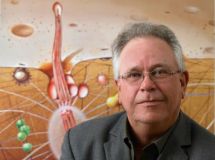 Until recently, primary cilia were largely thought of as evolutionary relics. These hair-like appendages are found on the outside of nearly all animal cells, and act like sensory probes to test the environment and feed information back to the cell.

As University of Otago's Tony Poole (left) explains to Ruth Beran, he has been studying primary cilia, and is particularly interested in how their malfunction could lead to human diseases. For example, with colleagues he's been using cells and tissues to look at mutated primary cilia from a flock of New Zealand sheep that have a disease similar to the rare and lethal human genetic disorder called Meckel-Gruber syndrome. He was recently awarded a James Cook Research Fellowship. (image: Alan Dove Photography) 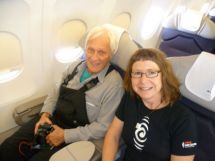 When Alison Ballance made her first trip to Antarctica at the end of last year, she got two pleasant surprises at Christchurch Airport. One, instead of the noisy C17 Globemaster she was expecting to travel on, there was an Airbus sitting on the runway. And two, she managed to score a seat in Business Class (right), sitting next to a veritable Antarctic veteran, Gerald Kooyman from the Center for Marine Biotechnology and Biomedicine Scripps Institution of Oceanography, University of California San Diego.

On finding out that he was heading straight out to a remote field camp, she decided she'd better interview him then and there about his more-than 30 year research into the diving physiology of emperor penguins. Emperors are the largest of all penguins, made famous, of course, in the movie March of the Penguins.

Gerald Kooyman believes that emperor penguins in particular are "excellent biological indicators of environmental change in a region that has powerful influence on the world's weather." He is one of many scientific supporters of the Last Ocean Campaign, which is advocating the creation of a marine protected area in the Ross Sea.